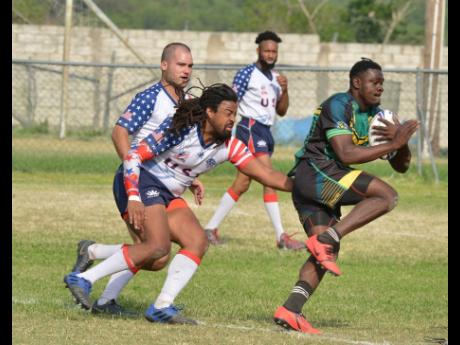 File
Roland Grey (right) of the Jamaica Reggae Warriors is tackled by Sean Hunt from the USA Hawks during a Rugby League friendly match held at the UWI Bowl in June 2019.

Robinson, who represented the Three Lions from the ‘90s to 2000s, helped England win the 2003 World Cup and also has the distinction of being the first black man to captain that country.

However, the 46-year-old former Wigan player, who also unveiled British sportswear manufacturer PlayerLayer as the team’s official kit supplier for the Rugby League World Cup yesterday, told loverugbyleague.com that he is hoping the team can be competitive at the showpiece event.

“I’ve played in three World Cup finals and I know the demands,” Robinson said. “We want to be as competitive as possible. We’ve got a real mixture of guys playing at all different levels. There will be some guys coming over from Jamaica, and it’s going to be great for seasoned campaigners like Michael Lawrence and Ashton Golding, while we’ve Dom Young over in the NRL.

“The key is to prepare well and, come the World Cup, give a good account of ourselves,” he commented.

He added, “Everybody knows Usain Bolt, but not many people know about Jamaica Rugby League. It’s going to be massive for rugby league in general. It will bring much-needed exposure to the game and will certainly be a great platform for the players.”

Robinson hopes the Reggae Warriors will stand out on the pitch when they go up against world number one New Zealand, Lebanon and Ireland in their group fixtures.

Although the team is not having the preparation it would have wanted because of the coronavirus pandemic, national coach Romeo Monteith believes the Warriors, who are ranked ninth in the world, should still be good enough to get two victories from their three preliminary-round games and secure a place in the quarter-final, which is their objective for the finals.

“So we know we can compete against Ireland, and know we can hold our own against Lebanon. However, it will be difficult to get a result against New Zealand, though it is not impossible. So our chances are fairly good, and we want to get to the quarter-finals. The aim is to win two games and qualify for the quarter-finals,” he said.

Meanwhile, Robinson disclosed that the fabric for the Jamaica team kit will be made from coffee and bamboo, and assisted by a Jamaican artist in its design.

The 2021 Rugby League World Cup is schedule to take place in England from October 23-November 27.