Worth the wait for Williams 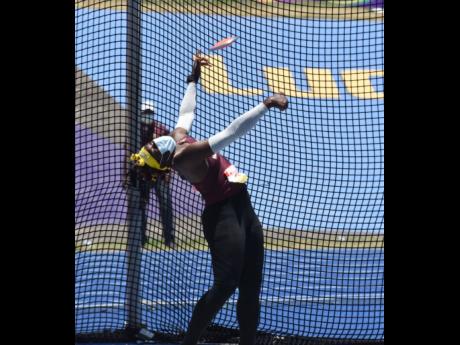 Kenyon Hemans
Holmwood Technical’s Cedricka Williams on her way to setting a new record of 47.04m in the Girls Class Two discus event at ISSA/GraceKennedy Boys and Girls’ Athletics Championships at the National Stadium yesterday.

If good things come to those who wait, Holmwood Technical’s Cedricka Williams certainly made it all worthwhile for her anxious supporters, saving it late, as she secured the Class Two discus record at the ISSA/GraceKennedy Boys and Girls’ Athletics Championships yesterday.

With the heightened expectations of her coach and her team, Williams saved her best performance for last, and with an effort of 47.04m, claimed the three-year-old record for her own at the National Stadium, on the second day of the five-day championships.

Damali Williams of Edwin Allen placed second with a distance of 43.72m, which she secured on her second attempt, and Britannie Johnson placed third with 42.32m.

After fouling on her first attempt, Williams, who came into the championships with a CV that boasted a 51.27m personal best, took the lead on her second try with a 46.23m effort but did not improve on subsequent attempts, which included a foul in round five

Despite the nervous wait, her coach, Dwight Jones, said that he was glad that they were able to accomplish their number-one objective.

“It’s really a humbling feeling. We planned to break the record and to get it on the last throw. She had me waiting, but finally, we got it. We got the job done, got the win and the record, so we are grateful,” said Jones, who added that the win was a big confidence booster for the team.

“This is a big boost. Everyone was looking up to Cedricka to break the record. So now that she got the job done, they will be motivated,” Jones said.

While it got nervy as the rounds went on, Williams said that she drew from the faith that her coach and the team placed in her.

“I just said to myself that the fans, teammates, everyone is counting me, so I just tried my best,” Williams said.

Meanwhile three of the four girls’ finals yesterday delivered a number of upsets as Edwin Allen surged into the lead after 14 finals with 108 points, followed by St Jago in second place on 96, and Hydel High in third place on 82 points.

Leonie Samuels of Rusea’s High captured the Class One Shot Put title in a new personal best of 13.21m, with St Jago’s Kayla Davis-Edwards, the event favourite, finishing third with 12.67m, having only made two successful attempts from her six allotted rounds. Edwin Allen’s Monifa Edwards took silver with a distance of 12.79m.

Natrilia Campbell, 5.42m, battled through injury to win the Class Four long jump gold, ahead of favourite Toniann Allen (Edwin Allen), 5.22m, who could only manage a third-place finish despite a season best of 5.55m coming into Champs.

Allen’s teammate, Angel Robinson, who had the second- longest distance (5.45m) coming into the championships, missed out on the medals completely, finishing in fourth place with 5.17m.

The silver medal was won by St Catherine’s Rihanna Chambers, with 5.40m.

But it was not all bad news for the defending champions, Edwin Allen, as they found success in the Class Two high jump, where Rasheda Samuels captured gold with a height of 1.73m, setting a new personal best. Anniskha McDonald of Vere Technical had the best mark this season entering Champs with 1.80m but could only manage to finish third with 1.65m. Maliaka Cunningham of Wolmer’s Girls cleared 1.70m to earn silver.

Both Edwin Allen and St Jago will have opportunities to make their move towards the top of the standings today, with four of the seven finals, headlined by the 100m.

While 80m hurdles champion Camoy Binger of St Jago qualified for the semi-finals of the Class Three 100m with 12.81 seconds, it was Lavanya Williams of Ruseas who had the fastest time, with 12.21 seconds.

Edwin Allen’s sibling duo of Tina and Tia Clayton easily advanced to the Class Two 100m semi-finals with times of 12.05 seconds and 12.36 seconds, respectively, and Shakeira Bowra of St Catherine High and Brandy Hall of Edwin Allen both won their quarterfinal heats in times of 12.05 seconds and 11.98 seconds, respectively. The latter time by Hall is the fastest time among the semi-finalists.