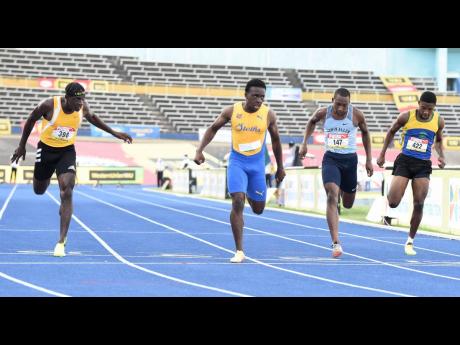 Dennis, who is clearly back to his best after a series of injuries threatened to derail his development, stopped the clock at 10.53 seconds (-2.3), ahead of Petersfield’s Antonio Watson, 10.58, and Kingston College’s (KC) Bouwahjgie Nkrumie, 10.65.

In fact, Dennis’ victory sealed a clean sweep of the Boys’ 100m finals for the Reynaldo Walcott-coached STETHS team.

“I was feeling very nervous and a bit tense going into the final, but I am happy to have those encouraging people around me to motivate me. This gold medal is very special to me because this is my last year at Champs, and I had to do something for my school,” said Dennis, who paid homage to Walcott and shared that he was not surprised by his school’s sprinting dominance.

“Coach (Walcott) goes out of the way to ensure that everything is fine, and as you can see, we have a good programme at STETHS,” he said. “I was expecting this sweep in the 100m because of the work that my coach has been doing down there in St Elizabeth with our team. He has been a real motivator for us.”

In a highlight for KC, Ralford Mullings, 61.92m, led home a one-two in the Boy’s Class One discus in front of his teammate, Javon Osbourne, 60.06m.

Edwin Allen’s Christopher Young was third with a throw of 54.99m.