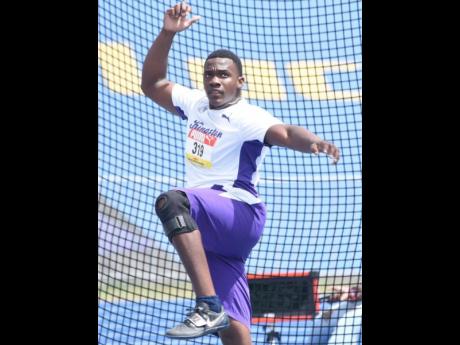 Ian Allen
Kingston College’s Ralford Mullings competes in the Class One boys discus event at the ISSA/GraceKennedy Boys and Girls’ Athletics Championships at the National Stadium on May 13, 2021. Mullings won with a mark of 61.92m.

Despite capturing the gold medal in the Boys’ Class One Discus throw at the ISSA/GraceKennedy Boys and Girls’ Athletics Championship yesterday, Kingston College’s (KC) Ralford Mullings was disappointed that he did not break the record in the event at the National Stadium.

The 18-year-old Mullings, who led home a KC one-two, won the event comfortably with a throw of 61.93m in front of his teammate, Javon Osbourne, 60.06m.

Edwin Allen’s Christopher Young was third with a throw of 54.99m.

In fact, Mullings believes that if there were fans inside the stadium to cheer him on, then he would have easily broken Travis Smikle’s record of 66.88m, which was set in 2011.

“I am really disappointed, but at the end of the day, I can’t complain because it is nine points for KC. I think that if I had spectators in here to cheer me on, I could have broken the record,” said Mullings.

Mullings’ best ever distance in the discus is 63.69m, which he achieved earlier this season.

“Just seeing the KC crowd and hearing the cheers and the claps and the horns, that would build the vibes,” he said.

Mullings admitted that at the start of the event, he was very nervous but shared that his confidence grew as the competition progressed.

“At first, I was pretty timid and I was a bit passive, but as I grew in the competition, I became a lot more comfortable, but this mark was two metres off my personal best, so I know I could have done a lot better,” he said.

Mullings will be seeking his second gold medal at the championships when he competes in the final of the shot put event today, which takes place at 9:50 a.m.

Meanwhile, Osbourne said that he was delighted with his silver medal performance.

“I am very happy with this medal because I have been training really hard this season, and so I am really happy with the result,” said Osbourne. “I know that I could have done a lot better, but it is what you do on the day, but I am satisfied that we got the one-two in the event because we need these points.”