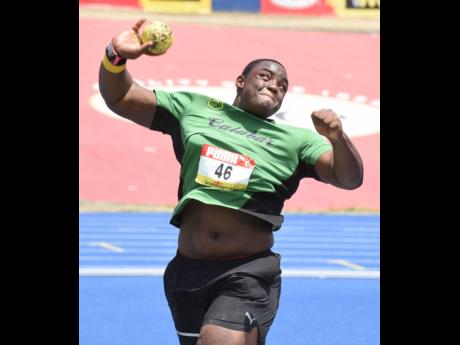 Ian Allen
Calabar’s Kobe Lawrence on his way to winning the Class One boys Shot Put event at the ISSA/GraceKennedy Boys and Girls’ Athletics Championships at the National Stadium yesterday, with a throw of 19.00m.

Having captured his first gold medal at the ISSA/GraceKennedy Boys and Girls’ Athletics Championships at the National Stadium yesterday, Calabar High School shot putter Kobe Lawrence has now set his sights on doing well at this year’s National Senior Championships, with the hope of competing internationally at the senior level.

Lawrence won the event with his final throw of 19.00m, after struggling at the beginning of his series with two foul attempts on his opening efforts. His teammate Denzs Simmonds won the bronze medal with a throw of 17.26m, while Christopher Young from Edwin Allen took home the silver medal with a mark of 18.30m.

The 17-year-old Lawrence, who has a personal best of 19.15m in the event, said this victory has given him a lot of the confidence for the reminder of the track and field season.

“My aim is to go there (National Senior Championships) and do well by making it into the top eight of the competition,” said Lawrence. “I think that, once I make it there, then anything can happen, because you never know,” he said.

Lawrence’s effort was well off the meet record of 20.65m, which was set by Petersfield’s Kevin Nedrick in 2017. However, Lawrence says he is pleased with his mark, despite failure to throw over 20m mark in the final.

“I am pleased with this distance and I have to thank God. I know that I could have gone a little further, but I am still grateful,” Lawrence said.

Lawrence stated that his preparations leading into the championships were excellent despite the COVID-19 pandemic, as he still managed to maintain his focus and discipline throughout his training sessions.

“I took advantage of the COVID-19 situation in my preparations for this championships because I kept on training. I didn’t stop training and so it really worked out well with a gold medal for me today,” he said.

“This will give me a lot more confidence going forward because I have two more years at Champs and I would love to continue winning in this event,” he said.