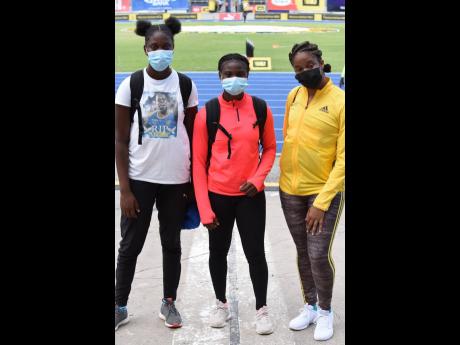 Ian Allen
Clarendon College’s Roxene Simpson (left) and Kimola Hines (centre) were first and second respectively in the Class One Girls discus throw final, ahead of Manchester High School’s Fabrienne Foster at the ISSA/GraceKennedy Boys and Girls’ Athletics Championships at the National Stadium in Kingston yesterday.

Clarendon College’s (CC) throws coach Davion Chanteloupe could not have asked for a better result in the Class One girls’ discus final on the fourth day of the ISSA/GraceKennedy Boys and Girls’ Athletics Championships (Champs) at the National...

Clarendon College’s (CC) throws coach Davion Chanteloupe could not have asked for a better result in the Class One girls’ discus final on the fourth day of the ISSA/GraceKennedy Boys and Girls’ Athletics Championships (Champs) at the National Stadium yesterday.

With the team struggling throughout the competition so far, Roxene Simpson gave the school reason to cheer as her effort of 45.85m won her the title and her teammate Kimola Hines secured second place with 44.98m on her final attempt. Fabrienne Foster of Manchester High School took third with 43.79m.

Chanteloupe said that the success came at the right time, with no good finishes for the school up to this point.

“This is a big win,” he said. “I think it will boost the confidence of everybody else throughout the championships as so far, we have been getting so many blows from all different angles.

“This is the roughest championships that Clarendon College has ever had and I can tell you this will lift the spirits of the team and make everybody strive and do well.”

Chanteloupe said that the one-two finish was a fitting tribute to their driver Keith Dunkley, who passed away days before the start of Champs.

“I think its just breathtaking — Speechless,” he said. “She really went out there and as you can see, when she finished, she put on the shirt because she and Mr Dunkley were close. She did it just for him.”

While both Taylor and White entered the final with the top two fastest times (both with 59.90 seconds in their semi-finals), White said that her only goal was to capture the title and not on the battle between them.

“I was just focusing on doing my best and hitting my personal best. I wasn’t really focused on anyone else,” White said.

In other final results, it was a good day in the field for Edwin Allen as Asia McKay won the Class Four girls’ high jump with a height of 1.62m. Jayla Williams of St Jago High came second with 1.55m while Rhianna Lewis of Rhodes Hall High School came third with 1.50m.

Edwin Allen’s Ackelia Smith won the triple jump title in 13.42m, and earned the qualifying standard to compete at the World Athletics Under-20 Championships in Kenya this August. Velecia Williams of Hydel High won silver with a distance of 12.87m while St Jago’s Kahdijah Bailey came third with a personal best of 12.25m.

The sprint relays highlighting the day’s events as well as the 200m finals are opportunities for sprint double success after the semi-finals yesterday.

In Class Four, after capturing the 100m title on Thursday, Edwin’s Allen’s Theianna-Lee Terrelonge is aiming for a similar outcome for the 200m as she qualified for the final in the fastest time among the field in 25.54s. Tiana Marshall of Wolmer’s Girls’ School is the second fastest with 26.14s. The race is scheduled for 11:35 a.m.

At 11:45 a.m., the same opportunity is up for grabs in Class Three as Champs debutante Lavanya Williams of Rusea’s High School is the favourite to take the title, entering with the fastest time, 25.12s, in her semi-final.

At 12:05 p.m., Edwin’s Allen Tina Clayton will have her turn in the Class Two final but enters with the third-fastest time with 24.12s. Hydel’s Alana Reid has the fastest time in the final, with 23.98s, a season’s best, while Clarendon College’s Dejanea Oakley ran a personal best of 24.02s in her semi-final to advance as the second-fastest qualifier.

Edwin Allen’s Brandy Hall qualified for the Class One final set for 12:15 p.m. with the fastest time in the field, running a season’s best of 24.06s in her semi-final.