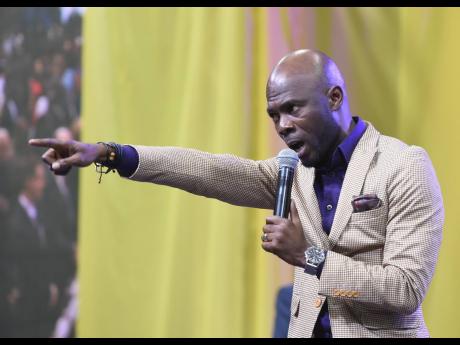 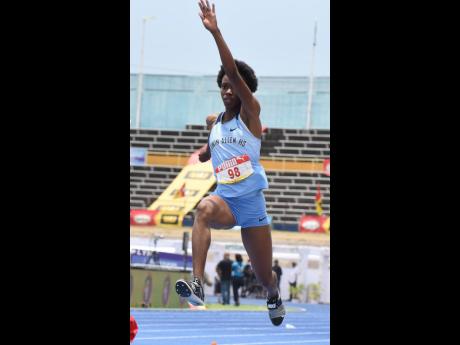 With the mental toll that the 2021 junior track and field season took on defending girls champions Edwin Allen weighing heavy, their captain Ackelia Smith, has credited the visit of popular gospel crooner, Rondell Positive, for lifting the spirits of the team leading up to the ISSA/GraceKennedy Boys and Girls’ Athletics Championships (Champs).

Smith took the Girls Triple Jump Open event yesterday, with a distance of 13.42m, a distance she achieved on her third attempt.

The leap was good enough for her to meet the qualifying standard to compete at the upcoming World Athletics Under-20 Championships in Kenya, which is set to take place in August.

Smith admitted that the challenges of this season were mentally taxing on the team because of COVID-19 pandemic and that the team got a well-needed morale boost from the gospel artist, who visited the team during their preparations. Smith said that having him there helped to mentally prepare them for a spectator-less Champs.

“It definitely boosted them. He was like ‘Ok there’s not going to be fans in the stands so you have to have the grandstand in your head.’ And everybody was like, yes that’s going to have to be true for this year,” Smith told The Gleaner. “It was very motivating for him to come (to Edwin Allen). It really lifted the spirits of the team.”

It is that spirit, which Smith hopes will lead the school from Frankfield in Clarendon to a seventh consecutive title.

“For the team and the school, I know the girls would appreciate it all. They have trained hard and they want to see their hard work paying off,” Smith said. “I know that winning comes with a lot of benefits and we accept the benefits that come with winning. That’s why we come out here every year and we try very hard.”

Smith fell short of breaking the Champs record of 13.52m, which was set by Kimberly Williams in 2007. However, with an eye now towards Kenya, Smith says she is proud that she now has the opportunity to represent her country considering the difficulties that the pandemic has brought to other teams.