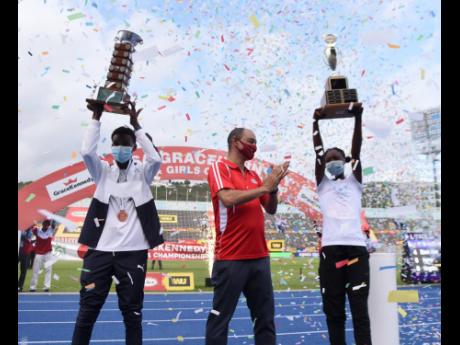 Jamaica College (JC) produced a gritty last-day performance to capture the ISSA/GraceKennedy Boys’ Athletics Championships at the National Stadium yesterday. JC finished with 328.5 points to bring the Mortimer Geddes Trophy back to Old Hope Road for the first time since 2011. Dethroned champions Kingston College (KC) who lead by 7.5 points heading into the final day finished second with 313 points. Calabar High were third with 241.5 points.

Edwin Allen secured their seventh consecutive title and eighth overall with a final tally of 340 points. St Jago High School improved on their fourth place in 2019 to finish second with 309.5 points. Hydel High who finished runners-up in 2019 placed third with 301.5 points.

JC head coach Neil Harrison could not hide his joy after the win and was pleased that the team accepted the challenge that KC presented to them.

‘The brave may fall but never yield’

‘The brave may fall but never yield’

“We expected the rivalry from KC,” Harrison told The Sunday Gleaner. “They live by their motto ‘The brave may fall but never yield,’ so we know the kind of character they have. So, I prepared the boys for it and the rest is history.”

Edwin Allen head coach Michael Dyke said that the obstacles faced by the team this year made this success worthwhile.

“This was challenging for many reasons — injuries, the protocol, finances — but overall, we are happy to know that despite all of those challenges we overcame them and we were able to once again be the champions,” Dyke said.

Javier Brown got JC off to an impressive start on the day, winning the class one 400m title in 45.75s. Calabar High School’s Jeremy Bembridge was second in 45.94s while Tahj Hamm of Holmwood Technical finished third in 46.22s.

Edwin Allen’s Chevonne Hall added the 800m Class One Boys crown to the Class One 1500m title and in the process set a Champs record of 1:48:58 minutes. He erased the previous record set by Calabar’s Kimar Farquharson (1:48:67 minutes) in 2019.

Rusea’s High School’s Aalliyah Francis completed her double in Class One after adding the 200m title to the 400m she won earlier. She won the half-lap event in 23.85s. Bethany Bridge of Edwin Allen was second in 24.25s while Joanne Reid of St Jago finished third in 24.42s.

Outstanding Edwin Allen sprinter Tina Clayton also captured her double, winning the Class Two 200m title in 23.45s to add to her 100m triumph. Alana Reid of Hydel was second in 24.29s while Oneika McAnnuff, also of Hydel, was third in 24.57s.

In the sprint relays, while St Jago took both of the Class One 4x100m relay titles, Edwin Allen set a record in the Class Two event in a time of 44.81s. The Class Three and Four events were won by Hydel and Edwin Allen respectively while for the boys, Class Two was won by JC, and STETHS won class three.

Hydel closed the Girls Championships by winning the 4x400m in 3:38:99 minutes ahead of Holmwood (3:40:27 minutes) and St Jago, third in 3:41:68 minutes. Excelsior High won the boys 4x400m title after JC was disqualified due to a lane infringement in the second leg of the race.