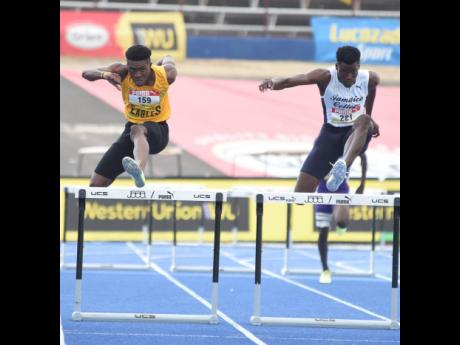 Ian Allen
Jamaica College’s Javier Brown (right) on his way to a record in the Class One Boys 400m hurdles, ahead of Devontie Archer of Excelsior High School, at the ISSA/GraceKennedy Boys and Girls’ Athletics Championships at the National Stadium on Friday.

After his outstanding showing at the ISSA/GraceKennedy Boys and Girls’ Athletics Championships (Champs), Jamaica College’s (JC) Javier Brown is now targeting a spot on Jamaica’s senior men’s team to the Olympic Games in the 400m hurdles event this...

After his outstanding showing at the ISSA/GraceKennedy Boys and Girls’ Athletics Championships (Champs), Jamaica College’s (JC) Javier Brown is now targeting a spot on Jamaica’s senior men’s team to the Olympic Games in the 400m hurdles event this summer.

Brown put on an impressive display at the National Stadium when he broke the Class One Boys’ 400m hurdles record with a time of 49.86 seconds, erasing the previous time of 49.94 seconds on Friday.

Brown’s time in the hurdles has ranked him as the second-fastest Jamaican in the world this year behind Kemar Mowatt (48.90s).

He told The Sunday Gleaner that the hurdles is his favourite event.

“I am looking forward to the National Championships (Trials) but I know that it is not going to be easy for me,” said Brown. “I know that I have to train a lot harder to compete with the big boys and just go out there and do my best.

“I like both events, but I think I am better at 400m hurdles, and that will be my focus going in the National Championships.”

Brown said that his performances at Champs has prepared him physically and mentally for the National Championships.

I think these champs performances will prepare me for that because I’m very confident at the moment, so I will be going there in a confident mood,” he said. “I am just going to do my best and leave everything on the track at the National Trials.”

Brown said that he was not surprised at his performances at Champs because he has worked hard this season despite the COVID-19 restrictions.

“To be honest, I am really happy and thankful because this is my first year winning a gold medal at Champs, so I am grateful for that,” Brown said.

“This is my first year running the 400m hurdles at Champs so I was a bit surprised that I broke the record in the event on Friday.

“ I knew that I was in excellent shape coming in the championships, but to break the 400m hurdles record and coming back to run a personal best in the 400m, this an overwhelming feeling for me.”