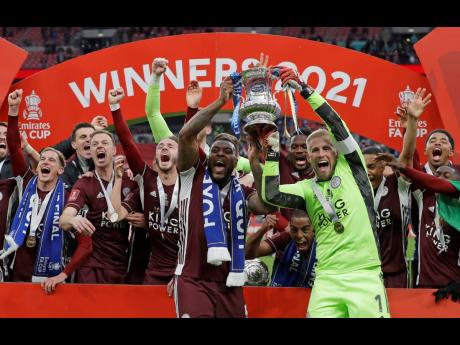 Youri Tielemans was preparing for the English FA Cup final yesterday when he received a text message with a clear instruction: Aim for the top corner.

When the ball landed at the Leicester midfielder’s feet, 63 minutes into the 140th final, a powerful shot from 30m was aimed just where he had been advised.

It was a sensational way to win the FA Cup for the first time in Leicester’s 137-year history, 1-0 against UEFA Champions League finalists Chelsea.

Even sweeter than the strike was Leicester being able to celebrate in front of their own fans as Wembley Stadium hosted England’s biggest crowd – more than 20,000 who tested negative for the coronavirus – in 14 months.

Not that time. Instead, the video assistant review came to Leicester’s rescue in the 89th minute to prevent former Reggae Boy Wes Morgan from a moment of heartache.

The 37-year-old club captain had been on the pitch for only seven minutes when he accidentally deflected in former teammate Ben Chilwell’s cross. But one of those marginal offsides that so irritate players and fans was detected and the roars of Leicester fans were even louder than the moment Tielemans scored.

After losing four finals – the first in 1949 at the old Wembley – Leicester’s name is finally etched on to the cup of world football’s oldest competition. The team from central England is a champion again, five years after Morgan collected the English Premier League trophy.

Players – such as Chelsea duo Chilwell and N’Golo Kante – have left since that improbable 5,000-1 title triumph but Morgan and matchday captain Schmeichel are still there to celebrate again, this time in a moment tinged with sadness.

Inside the jerseys at Wembley were photos of Vichai Srivaddhanaprabha, the club’s Thai owner until he died in 2018 when his helicopter crashed in flames next to King Power Stadium.

“He is always with us, Kun Vichai,” said Schmeichel before handing the FA Cup on the field to Vichai’s son, Aiyawatt Srivaddhanaprabha, who now runs the club.

Also in tribute to Vichai was a banner covering seats in the closed third tier at Wembley, with his quote, “Our dreams can come true if we have the courage to pursue them.”

Chelsea and Leicester took a knee before kick-off, which has been a feature of games in England since June as part of calls to eradicate racial injustice in society following the police killing of George Floyd in Minneapolis. But there was some booing by fans against the anti-racism gesture that was largely drowned out by applause and cheers.

In the post-match celebrations, Hamza Choudhury and Wesley Fofana were wrapped in a Palestinian flag amid escalating violence between Israel and Hamas in and around Gaza.

Leeds are on for a top-half finish in their first season back in the Premier League after 16 years. A 4-0 victory over Burnley was started by Mateusz Klich curling in the opener before half-time, followed in the second half by Jack Harrison and Rodrigo’s double. Fulham, one of the three sides already relegated, lost at Southampton 3-1.