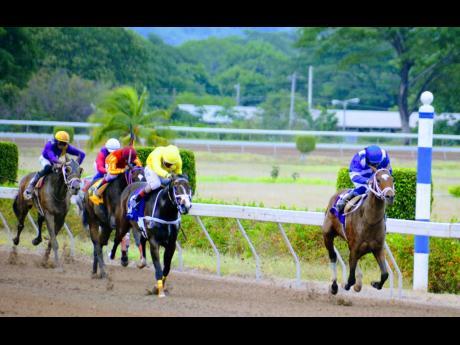 SIR ALTON, who entered the event not looking the part at exercise since making a winning returning from a near five-month break on April 19, chased TREVOR’S CHOICE and FATHER PATRICK to the top of the lane before being joined by NIPSTER rounding rivals.

A resolute TREVOR’S CHOICE fought hard to hold FATHER PATRICK at bay but had no answer for Horse of the Year NIPSTER, who responded to Robert Halledeen’s urgings, surging along the rail to land the six-and-a-half furlong event in 1:19.2.

Anthony Thomas edged one further of his co-champion, Dane Nelson, with a two-tmer - CHENNAI EXPRESS and NEVADA - in the fifth and eighth races, respectively.

Nelson’s lone win was a runaway victory astride SECRET IDENTITY in the ninth, as he sits three behind Thomas, 42-39, in the standings, heading into Monday’s nine-race card.