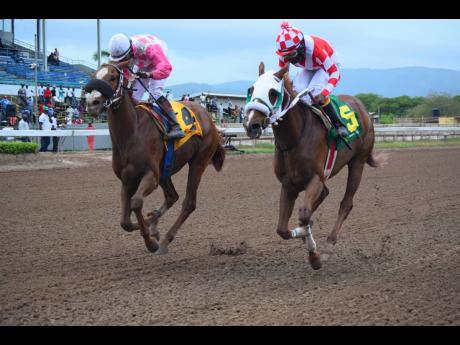 File
Miniature Man (left), ridden by Dick Cardenas, and Further and Beyond, ridden by Dane Nelson, finish in a dead heat in the Kingston Trophy at Caymanas Park in Kingston on Saturday, May 8, 2021.

THE Jamaica Racing Commission (JRC), spurred by ‘complaints’ from interested parties, has launched an investigation into a photo-finish decision which, by rule, it cannot overturn, but to appease persons who believe that they were somehow wronged, is giving a listening ear based on what it deems a “reasonable threshold” for a public hearing.

To cut to the chase of what has descended into rather unsavoury remarks being made on social media, especially by a Twitter troublemaker, there is absolutely nothing wrong with the judges’ so-called decision. In fact, the judges made no decision. It was, instead, a declaration.

While busy drawing lines and sending viral images, the instigators have conveniently ignored the technology, which determined that the race was a dead-heat, subsequently declared by the photo-finish camera operator and team of placing judges.

Was there an issue with the symmetry of the mirror and photo-finish camera? Yes. Does that have anything to do with the electronic photo-finish system, which could not separate either horse at the precise moment they passed through a slither in the high-speed camera’s lens at 1900 clicks per second? Not one darned thing.

Whereas the mirror, which became an added component to photo-finish technology in 1948, should have provided a perfectly aligned image, showing both sides of the horses at the winning post, it didn’t, causing unnecessary hysteria among persons with too many axes to grind.

If the Kingston Trophy were run on May 8, 1948, Twitter Troublemaker and his merry band would have solid ground on which to stand, misaligned images with no advanced technology to which to refer.

However, advances in technology led to a little thing called a digital camera, which, similar to its predecessor, is aimed at a specific point on the winning post, capturing ‘peep hole’ images, which then make a composite film, resulting in a photo-finish image.

The difference between 1948 and 2021, though, is that digitisation allows a finishing time to be recorded for every horse passing through the lens’ ‘peep hole’, which is what the purveyors of misinformation have conveniently ignored and made public in Twitter and Facebook posts.

The vertical line shown on the images being circulated is movable, older technology as well, which allowed, and still allows, the photo-finish operator to, hopefully, appease connections and the betting public by touching horses’ noses, displaying either a dead-heat or victory by a nose.

There is no demarcation of the winning post in either the photo-finish or mirror image. The camera’s alignment with the winning post represents an invisible ‘finish line’, providing times for every horse in events, from first to last.

On Saturday, May 8, 2021, one horse’s head was blocking the other. If the photo-finish camera, which is aimed at an immovable winning post, electronically records both horses passing through its lens in 1:34.59, what should the placing judge do, pull out his 1948 magnifying glass?