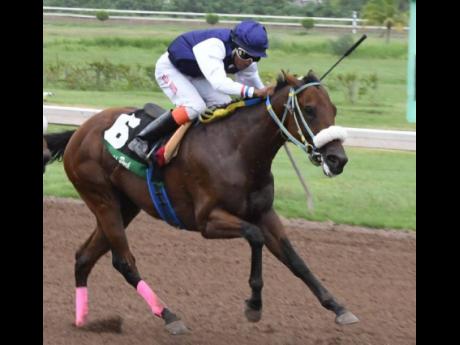 Always the horse to beat on back class after returning off a near six-month lay-up to chase home imported SIR ALTON at the trip on April 19, ROJORN DI PILOT got a plumb draw on the faster stands’ side, which Omar Walker milked to the end.

Keeping ROJORN DI PILOT dead straight from the gate, Walker saw off mid-track challenges launched by FORMAL GLADIATOR, GOD OF LOVE and LABAN before checking his rear-view mirror inside the last half-furlong to keep RAS EMANUEL at bay.

Anthony Thomas let out another notch on Dane Nelson in the battle of co-champion jockeys, logging a second two-timer in as many racedays, stretching his lead to five atop the riders’ standings.

Thomas enjoyed another armchair ride astride Jason DaCosta’s 1-9 favourite, MAKE UP ARTIST, who went two-from-two in the third event.

He returned to land the fifth with odds-on choice MAMACITA whereas Nelson failed to ride a winner on the nine-race card, which got off to a jolting start with BLOOD SONG scoring a 29-1 upset.

More bets were sent tumbling in the eighth won by 20-1 longshot, SWEET MAJESTY, ensuring a suite of million-dollar carryovers to next Saturday’s meet.