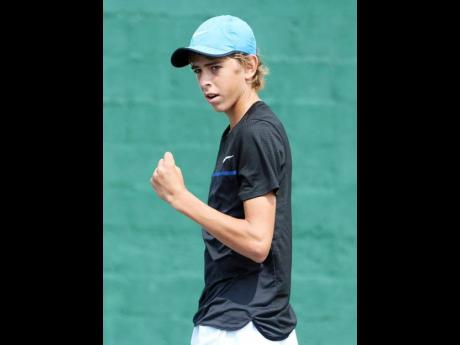 Bicknell, 19, has been having an outstanding season with the University of Florida, where he helped to guide the school to the South Eastern Conference Championships earlier this year.

University of Florida are the number one school entering this year’s championships, which will be held from May 20-22 in Orlando, Florida. Bicknell, who is ranked 34th ahead of the tournament, is unbeaten this season and has chalked up 18 straight victories. He told The Gleaner that this tournament means a lot to him and, therefore, he will be putting his best foot forward to ensure that he does very well.

“This is the biggest stage in college tennis in America, because if you win the National Championships it means that you are at a good level for your age group,” said Bicknell. “All the top universities in the country will take part and so I think winning it will give me a big boost and massive recognition for my career going forward.” Bicknell is scheduled to represent the country in Group Three of the Davis Cup championships in June. He pointed out that he is a much better player this season because he has worked very hard to improve his all-round game.

“I put in a lot of off-season work in Jamaica with my coaches, and mentally I have improved a lot,” said Bicknell. “I am also looking forward to playing Davis Cup this summer for Jamaica, because this is like the World Cup of tennis.”