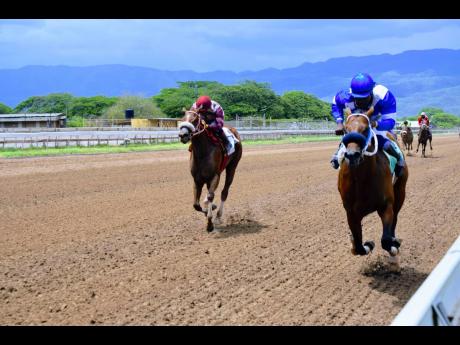 THE ‘Kingston’ might have been the last ‘major’ 2000 Guineas prep but the script for the colts-and-geldings classic won’t be finalised until after a pair of seven-furlong events set for this Saturday.

Champion trainer Anthony Nunes, revelling in a windfall of horses moved to his barn by last year’s top owner Michros, sends out NUCLEAR NOON, among five stablemates, in a seven-horse field for the seventh event.

Reporting off a four-month lay-up on April 24, the Nuclear Wayne-Noon It Is offspring turned back MUM on the lead at six furlongs before running away to clock 1:12.3. NUCLEAR NOON had last raced in the Jamaica Two-Year-Old Stakes, finishing sixth, seven lengths behind FURTHER AND BEYOND.

Since turning three, runners such as MINIATURE MAN, though he was in receipt of nine pounds from FURTHER AND BEYOND in the Kingston, has improved, suggesting other springers are lurking in the woodworks for Guineas Day.

NUCLEAR NOON should send a strong message to his new stablemate, FURTHER AND BEYOND, with whom he is on a collision course for the Guineas after avoiding him in the Kingston.

Similarly, the Monday Morning Trophy for local non-winners-of-two and imported maidens, has an interesting entry from Ian Parsard’s barn, BIG JULE, an in-utero colt, who got off the mark on debut at six furlongs on April 19, appearing rather lumbering in a near three-length victory, getting into gear late against BALLATELLI.

However, BIG JULE returned last Sunday morning, fitted with blinkers, to beat none other than stablemate MAHOGANY in a six-furlong spin out the mile chute, indicating he could have been gazing on debut.

BIG JULE is sired by Tapizar, whose MONOMOY GIRL, has won 14 races from 17 starts in the United States, including two Breeders’ Cup Distaffs, and was second to LETRUSKA in the Grade 1 Apple Blossom Handicap at Oaklawn Park last month.

His dam, Blues In The Grass, is a Blue Grass Cat mare, who won a modest two races from 21 starts but had changed hands for US$12,000 at auction in 2018 at Keeneland’s January mixed sale.

Should BIG JULE reproduce his Sunday-morning gallop, he will be racing the clock with his connections comparing times with NOON IT IS and the Kingston’s 1:34.1 dead-heat at seven and a half furlongs.