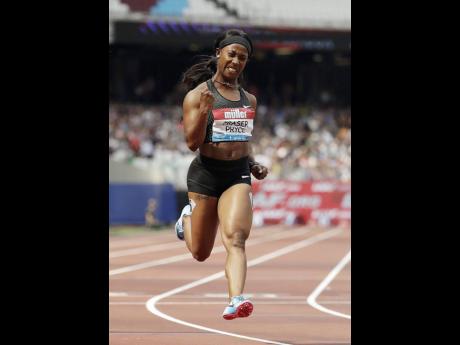 World champion Shelly-Ann Fraser-Pryce hit top form at yesterday’s Wanda Diamond League in Doha as she powered to victory in the women’s 100 metres in a season’s best 10.84 seconds.

On a good day for Jamaican athletes, there were second-place finishes for 800m runner Natoya Goule and triple jumper Kimberly Williams while Shanieka Ricketts ended third in the triple jump after producing a personal best 14.98 metres on her fourth attempt.

After cold and rainy conditions in Gateshead, which resulted in slow times in the sprints, the Doha weather was more favourable and the athletes produced some good times. With the American star Sha’ Carri Richardson, the world leader, pulling out a day before the meet, Fraser-Pryce, the double Olympic champion, started as the favourite to win the event and she did not disappoint. She was out the blocks in a flash and remained there until the finish to get home ahead of Nigeria’s Blessing Okagbare who was second in a season’s best 10.90 with the American Javianne Olivier, third in 11.03.

“I am happy that I won because it’s far away from the fourth place last time. I am excited about the season as I am progressing,” Fraser-Pryce said after her race. “It is gonna be the final Olympic appearance for me so I hope it will be good. The last three Olympics I went to, I was able to stand on the podium, and I am hoping to be able to make it there again, God willing.”

GOULE STARTED STRONG BUT FELL BEHIND

Goule was disappointed with her run.

“I could have won, I should have done better,” she said while adding that her focus is now on the National Trials.

Despite producing a personal best of 14.98 metres on her fourth attempt, World Championships silver medallist Ricketts had to settle for third overall under the new format for field events at the Wanda Diamond League. Under the new format introduced this season, the top three finishers after five attempts have to battle for the top three spots with previous marks irrelevant. Ricketts had a foul on her sixth attempt to finish third. Her countrywoman, Williams, who was lying in third with 14.69m, produced a mark of 14.45m for second after the sixth and final attempt. World leader Yulimar Rojas of Venezuela ,who led after her first attempt of 15.15 metres, did 15.12m in the jump off to pick up the win.

Americans dominated the men’s 200m, 400m and 400m hurdle. Kenneth Bednarek won the 200m in a close finish. He clocked 19.88 seconds to edge out Canada’s Andre de Grasse, 19.89. Rai Benjamin won the 400m hurdles in a meet record of 47.38 seconds holding off Allison dos Santos of Brazil who placed second in a personal best and Area record of 47.57 seconds. Kyron McMaster of the British Virgin Islands also went sub-48 seconds after finishing third in 47.82.

Norman produced a world-leading 44.27 seconds to capture the men’s 400m. Jose Anthony Zambrano of Colombia was second in 44.57 with third going to Fred Kerley of the United States in 44.60. Granada’s Kirani James was fourth in 44.61.