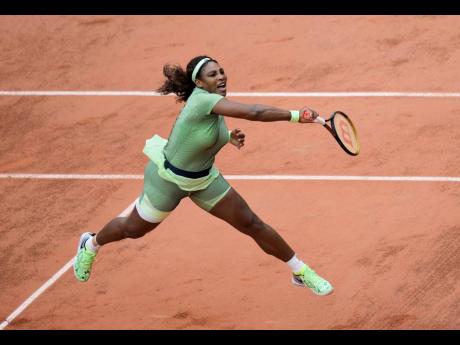 AP
Serena Williams serves to Romania’s Mihaela Buzarnescu during their second round match on day four of the French Open tennis tournament at Roland Garros in Paris, France, yesterday.

Her superior serve back at its unreturnable best, Serena Williams was in full control of her French Open match — until, suddenly, that stroke wasn’t as dominant and neither was she.

And then, pushed to a third set by an opponent offering up all sorts of spins and speeds and angles, Williams regained her form and forged to the finish.

Williams got back to the third round at Roland Garros, where she has won three of her 23 Grand Slam singles titles, by pulling away to beat 174th-ranked Mihaela Buzarnescu 6-3, 5-7, 6-1 yesterday on Court Philippe Chatrier.

Her serving, especially at the outset, was much better than in her first-round win. In that one Monday, she only put 51 per cent of first serves in play and got broken three times in 10 games.

“I’ve been practising my serve a lot. I’ve been playing, in practice, unbelievable on my serve. The other night was, ‘Wooooow,’ she said, rolling her eyes. “I’m glad it came better today. My coach told me it’s good that I’m doing it well in practice, because eventually, it will be good in the match.”

It sure was, especially at the outset against Buzarnescu, who didn’t manage to put any serves in play in the first game.

By the end of the first set, Williams had won 20 of 23 points she served.

Last year, Williams withdrew before the second round in Paris because of an injured left Achilles. No such issues so far this time, and the 39-year-old American covered the court well, although she did have some tape on her right thigh.

Next for the number 7-seeded Williams is an all-American match-up against Danielle Collins, who overwhelmed AnhelinaKalinina 6-0, 6-2.

It was a strong French Open afternoon for the U.S., including victories in the women’s draw for number 23 Madison Keys and in the men’s for number 31 John Isner, number 32 Reilly Opelka and unseeded players Stevie Johnson and Marco Giron.

It i’s the first time that four American men made it to the third round at Roland Garros since a half-dozen got there in 1996 — and Taylor Fritz still has to play his second match today.