The best to ever do it 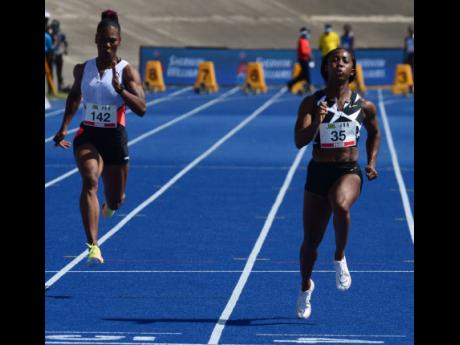 Photo by Collin Reid
Shelly-Ann Fraser-Pryce (right) wins the women’s 100m in a National Record of 10.63 seconds ahead of Natasha Morrison, 10.95, at the JAAA/JOA Olympic Destiny Series at the National Stadium yesterday.

Shelly-Ann Fraser-Pryce was not even two years old when American Florence Griffith Joyner (Flo Jo) shocked the world with a 10.49 seconds clocking in the 100m in 1988, almost 33 years ago. However, at yesterday’s latest instalment of the JAAA/JOA...

Shelly-Ann Fraser-Pryce was not even two years old when American Florence Griffith Joyner (Flo Jo) shocked the world with a 10.49 seconds clocking in the 100m in 1988, almost 33 years ago.

However, at yesterday’s latest instalment of the JAAA/JOA Olympic Destiny Series inside the National Stadium, the 34-year-old Jamaican further launched herself beyond the constellation of today’s stars and those before her, with an out-of-worldly 10.63 seconds clocking, making her the second-fastest person in history, behind the flamboyant American.

Fraser-Pryce’s time betters her own joint national record of 10.70, which she shared with Elaine Thompson Herah, and according to one of Jamaica’s most respected coaches, has shattered convention and provides further evidence of her position as the greatest to ever do it.

“It is mind-boggling, but what has she done? She has broken every single barrier that has ever existed in relation to sports, sports psychology, and age,” said noted local coach Maurice Wilson, who has led several Jamaican teams at major championships over the years.

“It’s a phenomenal performance and it proves to all of us that anything that someone wants to achieve, it is possible and we must not put limitations on persons. To think that Shelly-Ann would have basically gone through a couple years of some amount of, you could say adventure. She had her child, which is one of the greatest gift that any woman would want and then she changed camps for a short period, went back to her old coach, was able to replicate performances of old, took another break, went back to the coach that she had gone to before, and then to come back and run the second-fastest time in history on her home soil, it speaks to what can be achieved when the mind and the body is in sync,” Wilson added in reference to Fraser-Pryce’s eventful last few years on and off the track, and her new alliance with coach Reynaldo Walcott.

Noted track and field coach and commentator, Ato Boldon, a top-class gold medal-winning sprinter in his day, believes that Fraser-Pryce’s time puts another feather in her glistening crown and further secures an immovable legacy.

“For those of us who understand the 100m, this is just validation, because in 2019 when I said that Shelly-Ann is without question the best 100m sprinter to ever walk the face of the Earth, a lot of Flo Jo fans said how could she be the best and she isn’t the fastest, which shows that they just don’t understand the event or the sport,” Boldon said.

“Shelly-Ann Fraser-Pryce’s body of work, three Olympic medals, two gold, back-to-back Olympic titles, four world titles. It’s funny because I am waiting on the Olympics now, because I want to see what the clash with her and Sha’Carri Richardson produces, but that won’t change anything,” added Boldon. “Shelly-Ann for me has been the best for a while and it’s going to be interesting to see how she goes out.”

Try telling that to Richardson.

The hard-talking American upstart has been making noise on the track and off it – a refreshing rebel to some and boastful beginner for others.

Three times in the 10.7 region have propelled her into Tokyo 2020 medal contention and a head-on collision with Fraser-Pryce.

“My presence in this track game making history happen, no need for a thank you,” Richardson raised on her official Twitter account.

“We may see one of the best races ever (at Olympics). Sha’Carri and Elaine (Thompson Herah) will have to respond to this,” Boldon underlined.

Another American, Carmelita Jeter, whose 10.64 personal best now moves to number three on the all-time list, congratulated the Jamaican on her run.

“I just woke to some amazing news. @realshellyannfp has done it again. I give credit when it’s due. You have come back from having a child and showed the world how talented and driven you are. You are officially the fastest woman alive. Keep motivating these young queens,” Jeter posted to her official Twitter account.

For Wilson, Fraser-Pryce’s mark could serve as a welcome boost for Jamaican athletes ahead of the National Senior Championships and Olympic Games.

“It started with Usain Bolt and Shelly-Ann Fraser-Pryce and Melaine Walker where for every major championships that we went to, after the 100m, the entire camp would be lifted and so this is no different. Based on the amount of calls that I have been getting from athletes and administrators, the entire country has been energised for those involved in athletics and it will transcend into the team itself,” said Wilson. “I do expect that those persons who felt they could run 10.7 at the trials, they will now feel they can run 10.6, too, those who were targeting 10.8 will now feel that they can run 10.7. This will have a ripple effect on the team that will attend the National Trials and the Olympics.”

“This has changed the entire paradigm because what I will tell you, because of how competitive we are as a people, I am not sure if this is the end of 10.6s. I believe that there are more 10.6s to come, so all we have to do is pray for persons to be injury-free, pray for the right conditions and sit back and relax and wait. It is coming,” added Wilson.

The National Senior Championships will get underway on June 24, with the Tokyo Olympics set to start on July 23.