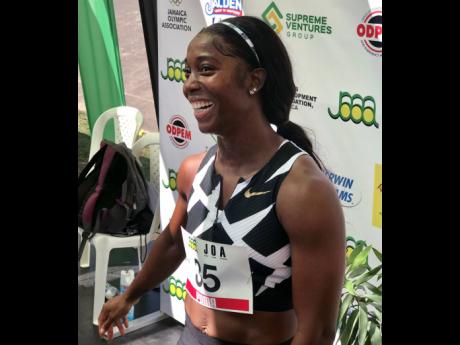 Photo by Gilbert Bellamy
Shelly-Ann Fraser-Pryce is all smiles after clocking 10.63 seconds to win the 100m at the JOA/JAAA Olympic Destiny Series at the National Stadium yesterday. The time is a new national record and the second fastest time in the event in history.

History was created inside the National Stadium yesterday morning, as two-time Olympic champion Shelly-Ann Fraser-Pryce blazed to 10.63 seconds (+1.3) in the 100m at the JAAA/JOA Olympic Destiny Meet, to set a new national record and register the fastest time in the event in 33 years.

Only Florence Griffith Joyner’s 1988 world record mark of 10.49 seconds is faster than Fraser-Pryce’s time, as the Jamaican sent a clear warning ahead of the National Senior Championships and the Olympic Games, lowering her own national record of 10.70 seconds, which she shared with Elaine Thompson Herah.

It was a vintage performance from the 34-year-old Fraser-Pryce, who was out of the blocks in a hurry, before Natasha Morrison rallied, showing some of that sub-11 seconds speed to close the gap midway the race.

However, Fraser-Pryce found another gear to finish well ahead of Morrison, who crossed the line in second place in 10.95 seconds, with her MVP training partner Kasheika Cameron, 11.39, taking third.

Fraser-Pryce, who has made no secret about her determination to run below 10.70 seconds, was elated with the result, even if she admitted being a little surprised by the time.

“First, I must say thanks to God, this is unbelievable. I didn’t expect to run that fast today because the objective was just to come out and get a good run in before the National Championships and work on my execution,” said Fraser-Pryce.

Reynaldo ‘Journalist’ Walcott, who last year took over as Fraser-Pryce’s coach after she left the Stephen Francis-coached MVP Track Club, was not surprised by the sprinter’s impressive run.

“No, I am not surprised as her personal best was 10.70 seconds and the objective was to go faster and my job, as the coach, is to help her to run faster. She really wanted to go sub 10.7 and she was really excited based on her after-race celebration and I am happy for her as she is not only an athlete, but she is a Jamaican icon,” stated Walcott.

There were also good wins for the MVP trio of Shericka Jackson, Janieve Russell and Stephenie-Ann McPherson.

Russell, the Commonwealth Games 400m hurdles champion, continued her good form in the event after winning in 54.88 seconds. World Championships 2017 bronze medal winner Ristananna Bailey-Cole struggled to a second-place finish in a pedestrian 58.99.

Meanwhile, McPherson produced her best time this year in the women’s 400 metres, winning in 51.06 seconds ahead of Candice McLeod of UWI, Mona, 51.22, and Roneisha McGregor, 51.43.

World Championships long jump champion Tajay Gayle led the way in the field after winning the event with 8.56 metres, but which was aided by an illegal wind of +2.5 metres per second. Ralford Mullings took the men’s discus with 58.99 metres ahead of Chad Wright, 58.67 and Trevor Gunzell, 54.02 metres.