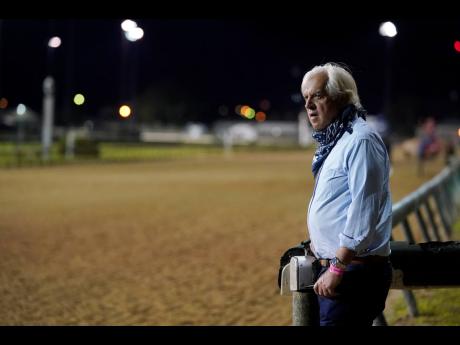 TRAINER Bob Baffert’s latest run-in with authorities in North America not only represents the second time in history that a Kentucky Derby winner stands to be disqualified for a failed drug test, his trend of infractions, MEDINA SPRIT being his fifth in a year, spans more than four decades in which he has been cited 29 times.

Baffert, however, always found a loophole around his infractions, which lax doping rules in North America condone, further impugning the integrity of a sport already viewed by onlookers as dodgy and stacked with conspirators whose only aim is to dupe bettors.

Locally, the Jamaica Racing Commission (JRC), too busy using magnifying glasses to separate MINIATURE MAN and FURTHER AND BEYOND in a time-stamped, photo finish camera-declared dead-heat, has been turning a blind eye to many preventable breaches, about which its own rules are crystal-clear.

For example, Rule 55 (5) states: “Every veterinarian who treats a racehorse which has been entered to run in a race shall report to the commission, in writing, the name of any such horse, any medication, drug or substance administered or prescribed, the name of the trainer of the horse, the date, time and place of treatment and any other information requested by the Commission.”

“Veterinarians registered by the Commission when attending to a racehorse of any age, being trained for and actively engaged in racing at any location where racehorses registered under these Rules are stabled, shall operate under the authority of the Rules of Racing. Violation of any of these rules will result in the Commission taking such action as it deems fit.”

The ease with which horses get on the lasix programme is also comical. Forget scoping, WhatsApp photos of what vets are told by trainers to be instances of bleeding after exercise are nothing but your favourite red syrup smeared on the animals’ noses.

Instances of horses deemed lame or sick turning up on racecards eight days later do nothing to inspire confidence in a system that has veterinarians operating as paid private practitioners, with approval from the regulatory body, while having responsibility set out in Rule 55A (7).

“Only a Commission’s Veterinarian shall remove a horse’s name from the Veterinarian’s List and he shall do so only when, in his opinion, the horse is fit, sound and ready for racing and in such a case he shall issue a Fitness Certificate in respect of the horse.”

In the UK, the roles of regulatory and private practitioners are separated. The British Horseracing Authority’s (BHA) website states:

“The raceday veterinary team is made up of both BHA Veterinary Officers and Racecourse Veterinary Surgeons. The BHA vets are regulatory vets – their main priority is to oversee the welfare of the horses on course and ensure that the standards and Rules laid down by the BHA are maintained.

“This includes ensuring that all racehorses are appropriately vaccinated and free from infectious disease, and the carrying out of pre-race examinations.

“The Racecourse Veterinary Surgeons are accredited by the BHA and employed by the racecourse. These vets provide immediate first aid and veterinary treatment for racehorses, working closely with the equine ambulance teams to ensure that any horse which suffers an injury is treated promptly.”

Another serious issue is that of the issue of trainers and syringes, which seemingly go hand-in-hand locally. Grappling with affordability, convenience, know-it-all, and in some cases, an aversion to veterinary expertise, too many local trainers appoint themselves veterinarians, much at the expense of threat to life and limb of horses and riders.

It’s not a situation that’s unique to Jamaica. Recently, backstretch raids at Parx in Pennsylvania uncovered what the Pennsylvania Department of Agriculture described as “a significant amount of contraband and items that have no business on the backside”.

Coincidentally, a Paulick Report article noted that “in what may or may not be a related development, there were 25 scratches from the following race meet”.

Searches were conducted through the barn area, tack rooms, grooms’ quarters, and external tack rooms, in addition to out-of-competition tests.

When last has the JRC sought to ensure that the safety of horse and rider isn’t being placed in the trust of trainers’ syringes?