Great to be back – Swaby 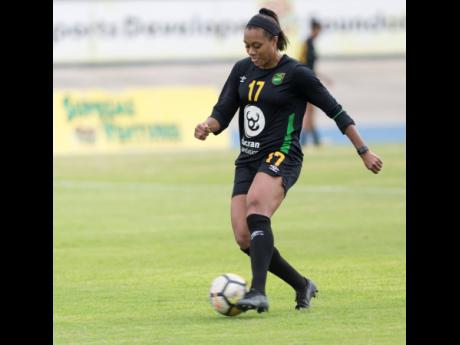 With the senior women’s national team finally together after more than a year, top defender Allyson Swaby says that she hopes the upcoming friendly internationals, as well as more consistent camps, will help to properly prepare the team for World...

With the senior women’s national team finally together after more than a year, top defender Allyson Swaby says that she hopes the upcoming friendly internationals, as well as more consistent camps, will help to properly prepare the team for World Cup qualifiers in November.

“It’s super exciting to be back with this group. I’m just grateful that we are finally able to be back together,” Swaby told The Gleaner.

The Reggae Girlz completed their pre-tournament camp on Monday in Houston, Texas, which was the first opportunity that the team has had to practise together since the Concacaf Women’s Olympic Qualifying tournament in February 2020.

The team has been on hiatus since then because of the COVID-19 pandemic but will return to competitive action tomorrow when they face African champions Nigeria at the BBVA Compass Stadium.

They will then face world champions the United States on Sunday and the AS Roma centre back is looking forward to resuming national team duties ahead of a critical year for the programme.

Swaby, who reported to camp on Sunday, said that the training sessions so far have been crafted on an emphasis on not just assessing their physical condition, but also crafting their style of play and getting the newcomers in the camp up to speed.

“I’ve read that the United States put these games here because it’s going to resemble for them what it’s like to play in Japan. So the climate is extreme, which is naturally making everything feel a little bit like a type of physical fitness work,” Swaby said. “But I would say that the emphasis is on creating a style of play for us and trying to get the new players integrated and understanding how we play. I would say it’s a split between tactics and making sure that everybody feels physically fit for the matches.”

With two tough assignments for their return to competitive action in Nigeria and the United States, Swaby says that it is an opportune time, not just to test themselves against the best, but see how they can tactically adapt to different situations against quality opposition.