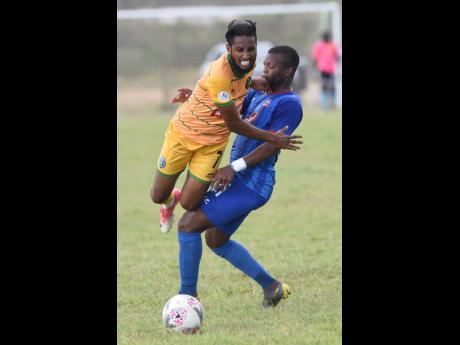 Ian Allen
Christopher Randall (left) from Vere United comes under a heavy challenge from Rodave Murray from Dunbeholden United in their Premier League match, which was played at the Wembley Centre of Excellence in Vere, Clarendon, on Sunday, February 16, 2020.

After months of inactivity and lost revenue opportunities, some of Jamaica’s top football clubs, burdened by mounting debt, are yet to receive an initial payout - nearing $1 million each, from the Professional Football Jamaica Limited (PFJL) ahead...

After months of inactivity and lost revenue opportunities, some of Jamaica’s top football clubs, burdened by mounting debt, are yet to receive an initial payout - nearing $1 million each, from the Professional Football Jamaica Limited (PFJL) ahead of the Jamaica Premier League (JPL) season.

The payment was expected to be made on Monday. However, a number of clubs were still awaiting the disbursement up to yesterday.

Officials from two of the smaller, less supported teams, Lothan Cousins, president of Vere United, and Herman Cruickshank, the Molynes United president, have painted a picture of desperation, as the clubs continue to stretch resources in preparation for the return of football in the island, after a 15-month hiatus, forced by the COVID-19 pandemic.

“We haven’t received any money from the association (PFJL) and we eagerly await the disbursement,” Cousins told The Gleaner yesterday.

“Having been dormant for some months, we would really love if they would advance some of this money so we can pay the players and coaching staff and ease the burden on the clubs within these first few weeks of training,” he added.

Cousins underlined that the added requirements placed on the clubs because of the agreed COVID-19 safety protocols under which the league was granted approval for resumption carry an increased cost component on the already cash-strapped organisations.

“Having been inactive for quite some time, it was always going to require money to restart. So whether or not we were officially notified (of the impending allocations), we expected to receive some money up front,” Cousins insisted.

Cruickshank, meanwhile, is expecting the monies to be distributed any day now but laments that his club has had to count every cent and can hardly wait for the boost to its coffers.

“The money hasn’t reach as yet but it is just a matter of it being sent to individual accounts. I do not think it will pass this week (without being disbursed),” disclosed Cruickshank.

“It is well needed. The players are eager to receive some money, but the money is in the professional arm’s account and it’s just a matter of it being sent to the individual accounts. It cannot pass Friday,” he stated.

“We try to feed the players and give them a little subsistence for bus fare and gas to reach training because we cannot offer them a salary. So we eagerly await the first disbursement, it will be a welcome sight,” added Cruickshank.

PFJL chairman, Christopher Williams, told The Gleaner that the funds were disbursed yesterday but was unclear as to why the monies had not reached the accounts of some of the clubs.

“Certainly, the monies have been sent from our accounts and I know some people have received. Donovan White of Waterhouse confirmed he received his funds,” Williams stated.

Efforts to get in touch with White were unsuccessful.

Each JPL club is due to receive a sum of $843,000 for this first instalment, an increase of nearly 50 per cent on the monthly allocation received during the previous sponsorship and league administration dispensation headed by the now-defunct Premier League Clubs Association.