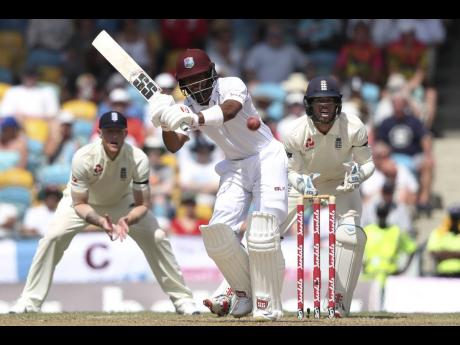 File
Shai Hope plays a shot during day one of the first cricket Test match agaisnt England at the Kensington Oval in Bridgetown, Barbados, Wednesday, January 23, 2019.

Resurgent stroke-maker Shai Hope believes his recall to the West Indies side for the series against South Africa has provided him the opportunity to write a new chapter in a turbulent Test career.

The 27-year-old Barbadian, dropped following the tour of England last July owing to a protracted run of wretched form, was on Tuesday included in a 13-man squad for the first Test at the Darren Sammy National Stadium in St Lucia starting today.

“Any cricketer would want to be part of any set-up in West Indies cricket so it’s been challenging [being out of the side] but I’m just happy to be here,” Hope said. “[I] just [want] to be more clear in my thought processes and overall success.

“[I am] basically trying to [turn a new page], trying to start a fresh book, so hopefully I can hit the ground running if I get the opportunity to go out there.”

He continued: “It’s a bit challenging in these [COVID-19] times when there’s not much cricket that you can play [because] of the obvious things around us, but it is what it is.

“Hopefully, in the first Test, if given the opportunity, then I can see some improvements and some changes to what I did previously.”

Hope scraped one half-century in his first 11 Tests after making his debut six years ago but his career appeared to be taking flight when he struck historic hundreds in each innings of the Leeds second Test in 2017, to deliver a remarkable final-day victory for West Indies.

However, his form nose-dived, and he averaged a paltry 19 from his last 17 Tests, forcing selectors to finally dispense with his services following the tour of England last year when he gathered only 105 runs from six innings.

His recall though was driven by his continued prolific form in One-Day Internationals where he averages 53 from 81 matches, but was cemented by his 79 and 106 in a West Indies inter-squad match last week.

Hope, who averages 26 from 34 Tests overall, has now scored seven half-centuries and a hundred in his last eight innings dating back to last February’s Super50 Cup, and said he was now well positioned both mentally and technically, to take advantage of a second chance in the longest format.

“Cricket covers different aspects so it’s about meshing all of them together, whether technical or mental,” he pointed out.

“I’ve been working on different things and the main thing is to just get the success out there. But I believe in finding a way, and I think I need to find a way to score the runs and do whatever I can for the team’s success.”

Hope has been joined in his recall by off-spinning all-rounder and fellow Barbadian Roston Chase, along with left-hander Kieran Powell, while selectors have also opted for uncapped 19-year-old pacer Jayden Seales.