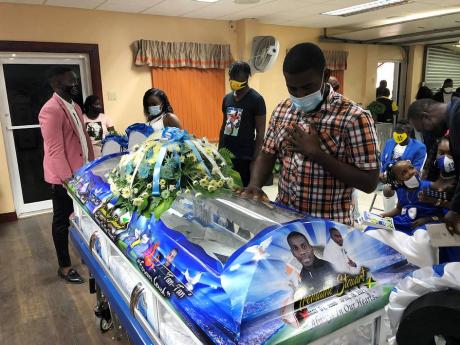 Keithy Simpson, a close friend of the late national player Tremaine ‘Tan Tan’ Stewart, could barely contain his emotions after viewing the body of his former teammate during his funeral service at Perry’s Funeral Home in Spanish Town yesterday.

Simpson, who played with Stewart at Portmore United and Waterhouse, said he has still not come to terms with the sudden passing of his close friend.

“It is really tough for me because when you don’t expect something and it happens then there is not much that you can even say,” said Simpson. “If I can feel this way, I could only imagine the family and to be honest I haven’t been able to train properly since this happened and I am not sure if I am even going to play this season,” he said.

Stewart collapsed and died during a football match in his Gordon Pen community on Sunday, April 18. He was 32 years old.

The attacking midfielder was signed to Dunbeholden FC at the time of his death. In fact, Simpson and Stewart both left Waterhouse for Dunbeholden at the end of the last season with thoughts of winning the Jamaica Premier League title for the St Catherine-based club.

“He was the one who asked me to play one more season because he was going to help me to win the title and to see he is not here anymore is really touching for me and it touches very deep inside,” said Simpson.

Peter Reid, vice president of the Jamaica Football Federation and former head of St Catherine FA who was also in attendance at yesterday’s service, said that Stewart will be sadly missed by all football lovers in the parish.

“It is very sad to lose someone like Tremaine in his prime because he is one of the shining lights where football is concerned in St Catherine,” said Reid.

“He was one of those players who influenced others because he was a leader and so we know that he will be missed, especially in his community,” he said.

“We watched him grow and we watched him play at the Spanish Town Prison Oval for Eltham High and he was very good and he went on to play overseas and did well and so it was very sad,” Reid said.

He made 12 appearances for the Reggae Boyz, scoring two goals. Stewart was laid to rest at the Dovecot Memorial Park in Catherine.