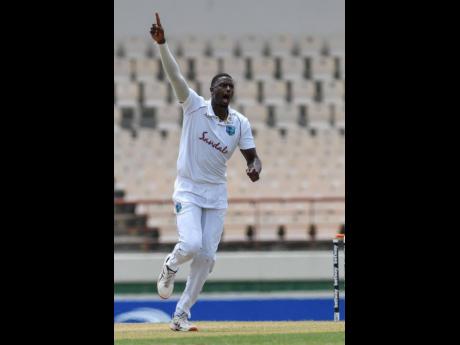 The West Indies are staring at an embarrassing defeat following day two action in the first Test against the visiting South Africans in St Lucia yesterday.

The hosts will resume on today’s third day on 82 for four in their second turn at the crease, still trailing the visitors by 143 runs. That huge lead was built up, thanks largely to a career-best unbeaten 141 from wicketkeeper Quinton de Kock, who led the Proteas charge in their total of 322.

Roston Chase on 21 and Jermaine Blackwood, 10, will have to bat out of their skin on today’s third day and try to stave off further embarrassment, as the West Indies try to avoid an innings defeat similar to that which they received against New Zealand last December.

It was Kagiso Rabada who started things off for the Proteas, as he trapped skipper Kraigg Brathwaite in front for just seven following a review.

Kieran Powell, who came into the side as a concussion substitute for Nkrumah Bonner, rattled up three boundaries but Rabada also hit him in front when he was on 15 with the score at 25 for two.

Shai Hope spent close to an hour at the crease for his 12 runs, but Anrich Nortje had his ticket once again, this time Hope offered a catch to Wiann Mulder to leave the visitors in tatters at 37 for three.

Nortje then inflicted more misery on the home side, as Kyle Mayers, after hitting three fours in his nine balls faced, was snapped up by the South African paceman to leave the West Indies 51 for four and in danger of falling for another very low score.

Blackwood and Chase then endured a torrid late evening barrage to add 31 crucial runs for the fifth wicket as the West Indies still trail by 143 runs with six wickets intact.

Earlier, de Kock demonstrated his prowess as a handy wicketkeeper-batsman, as he shared in three crucial partnerships which propelled the South African innings from 128 for four to 322.

The left-hander, who resumed day two on four runs, first shared in a 43-run fifth-wicket partnership with Rassie Van der Dussen who made 46.

He then added 53 runs with Mulder, who made 25, before he became the second of four wickets for Jason Holder.

A ninth-wicket partnership of 79 with Nortje knocked the stuffing out of the home side as de Kock aggressively brought up his sixth Test century which included 12 fours and seven sixes.

Holder, who also picked up the wickets of Nortje for seven and Lungi Ngidi for nought, ended with four for 75.

A. Nortje c Hope b Holder 7