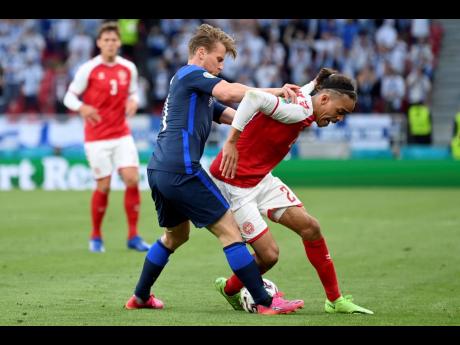 AP
Finland’s Rasmus Schueller fights for the ball with Denmark’s Yussuf Poulsen (right) during the Euro 2020 championship Group B match between Denmark and Finland at Parken Stadium in Copenhagen. Finland won 1-0. 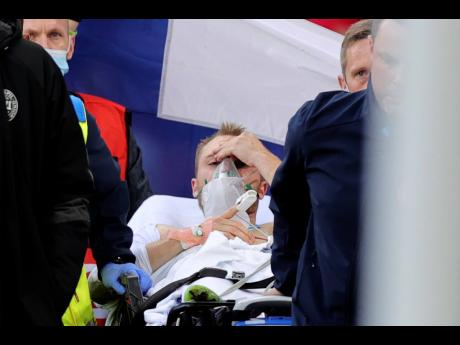 AP
Paramedics using a stretcher to take out of the pitch Denmark’s Christian Eriksen after he collapsed during the Euro 2020 championship Group B match between Denmark and Finland at Parken stadium in Copenhagen, Denmark, yesterday.
1
2

Joel Pohjanpalo scored and Lukas Hradecky saved a penalty to give Finland a 1-0 victory over Denmark yesterday in a European Championship game overshadowed by Christian Eriksen’s collapse on the field.

The game was suspended for about 90 minutes after Eriksen needed urgent medical treatment near the end of the first half before being taken to a hospital. The Danish football federation said Eriksen was awake and in stable condition.

When play resumed, Pohjanpalo put Finland ahead against the run of play in the 60th minute when he rose above Joakim Maehle to head home a cross from Jere Uronen.

Goalkeeper Kasper Schmeichel got his hands on the ball but couldn’t keep it out.

It was Finland’s only effort on goal in the entire game as Denmark dominated throughout and finished with 23 total shots, although only six were on target.

The Danes’ best chance came when they were handed a penalty after Yussuf Poulsen went down under a challenge from Paulus Arajuuri, but Hradecky dived to his left to stop a tame effort from Pierre-Emile Hojbjerg in the 74th.

Finland were making their debut at a major tournament but what should have been the biggest win in the country’s football history was completely overshadowed by Eriksen’s medical emergency.

Eriksen was given urgent medical attention on the field for about 10 minutes before he was carried off on a stretcher. The teams held an emergency meeting and decided to continue the match after it became clear that Eriksen was in stable condition.

Denmark had dominated the first half until the incident, and forced three decent saves from Hradecky in the opening 20 minutes. Jones Wind first tried a hard shot from the edge of the area, before Hradecky tipped a header from Pierre-Emile Hojbjerg over the bar and then palmed away a dipping long-distance shot from Eriksen in the 19th.

The Danes then failed to test Hradecky again until the penalty save.

At the final whistle, Finland’s players celebrated loudly in front of their fans, while Denmark’s hugged on the field.