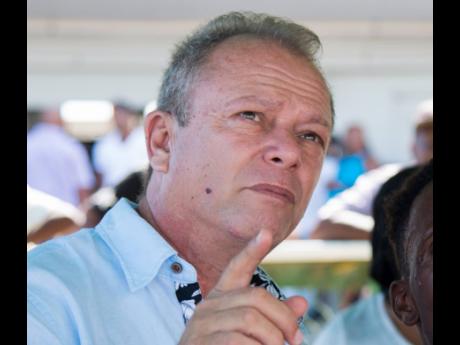 AWESOME TREASURE, running at odds of 21-1, changed gears on 1-2 favourite, EXCESSIVE FORCE, to run away with yesterday’s Alsafra Trophy, comfortably winning the mile event by two and three-quarter lengths.

Slowly away for her last two starts and beaten out of sight by EXCESSIVE FORCE at the distance on April 17, AWESOME TREASURE turned the form around in a stunning display of speed, fitted with a visor for the first time by trainer Gary Subratie.

A 14-1 winner at five furlongs straight on May 17, AWESOME TREASURE shot out of the gate in an opening quarter of 23.3 before opening up on far-striding EXCESSIVE FORCE, blasting past the half-mile in 46.0.

Dawkins afterwards threw the sucker punch, injecting pace from three furlongs out to enter the lane with a commanding lead built by a 1:11.2 split for the first six furlongs.

EXCESSIVE FORCE didn’t blow the turn as badly as he did in his last two races but was one-paced in the straight, not making any real gain on AWESOME TREASURE.

The two United States-bred runners were clearly better than the field, outclassing UNCLE FRANK, who finished third ahead of 3-2 choice DOUBLE CROWN.

Foster, one of three jockeys with two wins on the programme, got the nod in the stewards’ room in the seventh aboard CHRISANLI after BIG PAUL was disqualified and placed third for causing interference to DILIGENT late in the five-furlong straight event.

Racing continues on Saturday, followed by a Monday meet, which has now become staple, forced by COVID-19 curfews on Sundays.