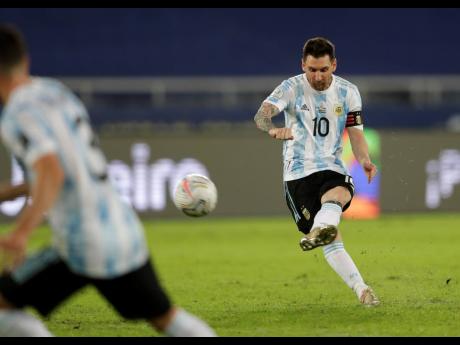 AP
Argentina’s Lionel Messi scores his side’s goal in their 1-1 draw with Chile in the Copa America tournament at the Nilton Santos Stadium in Rio de Janeiro, Brazil, yesterday.

Despite Messi’s intense performance, Argentina were held 1-1 by Chile in their Copa America opener.

The veteran Messi, who turns 34 later this month, might have one of his final chances of winning a title with Argentina at the Copa America.

He said ahead of opening game that winning with his national team is “the biggest dream” of his decorated career despite all the individual success and club titles with Barcelona.

Argentina appeared to be ready to start giving Messi what he craves. Coach Lionel Scaloni’s line-up wasted three clear opportunities between the 16th and 18th minutes, one from Lautaro Martínez and two for Nicolás González.

And then Messi opened the scoring in the 33rd after a free kick that Chilean goalkeeper Claudio Bravo couldn’t stop despite getting a touch on the ball to his left. Argentina continued to pressure Chile, who were missing injured striker Alexis Sanchez.

But Chile stepped up the pressure in the second half and earned a penalty after video review. Arturo Vidal’s shot from the spot was stopped, but Eduardo Vargas nodded into the empty goal to level the scoring in the 57th.

Messi continued to create opportunities until the end of the match, but his teammates showed the same difficulty to deliver goals as they did in the 2-2 draw at Colombia in a FIFA World Cup qualifier in Barranquilla last week.

“This match got complicated to us,” an exhausted Messi said after the match. “We needed to be calm, have the control of the possession and play more quickly. The penalty changed the match, too.”

Copa America was moved at late notice to Brazil after Colombia and Argentina were dropped as co-hosts. Many health experts criticised the move to a country where the COVID-19 death toll is nearing 490,000.

Argentina’s next match is against Uruguay on Friday.