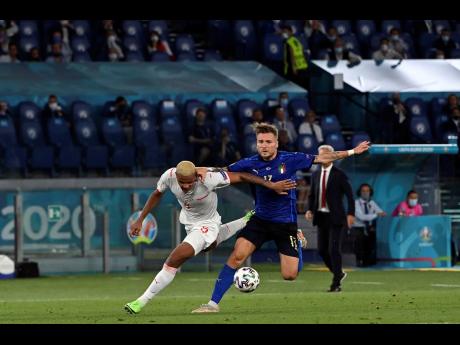 AP
Italy’s Ciro Immobile (right) in action against Switzerland’s Manuel Akanji during the Euro 2020 championship Group A match between Italy and Switzerland at Olympic stadium in Rome, yesterday. Italy won 3-0.

The wingers sprint forward like Ferraris. The midfielders are just as capable at scoring as the forwards, and the reserves look like starters.

A new-look Italy are impressing with their offensive flair at the European Championship.

Midfielder Manuel Locatelli scored two goals yesterday, and the Azzurri beat Switzerland 3-0 to become the first team to reach the last 16 at Euro 2020, and they did it with a game to spare.

They also did it with their 10th consecutive victory.

“I’m fortunate to have great players who enjoy playing football, like to have fun, and take some risks, which is the essence of football,” Italy coach Roberto Mancini said.

As usual — and perhaps the only characteristic carried on from Italy teams of the past — the defence was impenetrable.

It’s quite a turnaround for a team that failed to qualify for the 2018 World Cup.

Italy extended their unbeaten streak to 29 matches — one shy of the team record — and kept their 10th clean sheet in that run.

Mancini, however, suggested that Italy still trail France, Portugal, and Belgium on the list of tournament favourites.

“One of them is the World Cup champion, one is the European champion, and one has been first in the ranking for quite a while,” Mancini said. “They’ve been shaped over time, and it’s only normal that they’re ahead of us. But anything can happen in football. It’s not such a sure thing.”

Ciro Immobile added the third with another long-range effort in the 89th for his second score of the tournament.

Giorgio Chiellini had a goal waved off by video review early in the match because of a handball. Then the Italy captain exited with an apparent left thigh injury.

Italy lead Group A with six points after overwhelming Turkey 3-0 in the tournament opener. Wales are next with four points earlier after beating Turkey 2-0 in Baku.

Switzerland have one point and Turkey has zero.