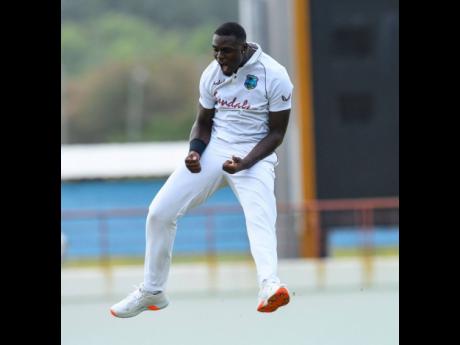 Ex-Test captain Jason Holder says he is thrilled by the emergence of rookie fast bowling talent, Jayden Seales, but has cautioned authorities against putting too heavy a workload on the teenager too early in order to guard against burnout.

The 19-year-old made an impressive Test debut last weekend despite playing a single first class match, picking up three wickets against South Africa in a spell that saw him bowl with pace and movement on a lively pitch at the Daren Sammy National Stadium here.

Holder, who played a key role in Seales’s first Test wicket when he snared a regulation catch at second slip to account for debutant Keegan Petersen, said it was important the player was now properly handled by Cricket West Indies.

“I just hope that we manage him well, and when I say manage him well, we still have to understand that Jayden [was playing] his second first class game and his first Test match,” Holder pointed out.

“So the body will take a little bit of time to adjust to the workload, and we’ve got to be very very careful not to bowl him to the ground.

“I think sometimes we get excited with a young prospect such as Jayden and throw him into all three formats.

“I would just personally like to see a gradual build up with him into the other formats, if that’s the direction Cricket West Indies wants to go.”

Included in the Test reserves for last December’s tour of New Zealand, the Trinidadian produced an ordinary effort in his only first class game for West Indies A, taking a single wicket from 21 overs.

However, selectors persisted with him, keeping him as part of the Test setup for the Sri Lanka series last March as a developmental player.

Handed his debut last Friday, Seales showed little signs of nerves, striking in his first over when he removed Petersen, and also knocked over opener Aiden Markram (60) and debutant Kyle Verreynne (6) late on on the opening day, to keep West Indies in the contest after the hosts had been earlier dismissed for 97.

Seales is likely to feature again for West Indies in the second and final Test which bowls off here tomorrow.

West Indies trail 1-0 after losing the first Test by an innings and 63-runs inside 2-1/2 days.