Look to OneOfAKind in Eros Trophy 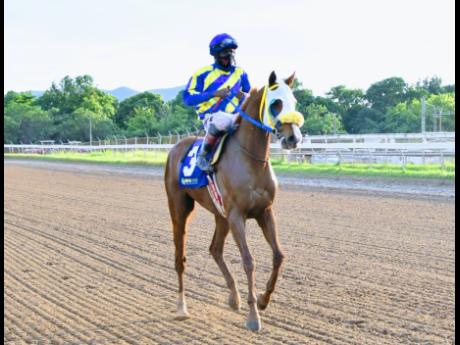 File
OneOfAKind, with Dane Nelson aboard.

HAVING improved leaps and bounds since fitted with the visor at the back end of last season, ONEOFAKIND has this year caught up with his classic peers, humbling the St Leger and Jamaica Derby winners, NIPSTER and KING ARTHUR, in back-to-back races, respectively, laying claim to the title of king of the hill, going for a fifth straight win in Saturday’s Eros Trophy.

Though FATHER PATRICK won the six-furlong Lady Geeta with 126lb in eye-catching splits, he should have dipped below the 1:13.0 he recorded. After getting rid of DEEP BLUE SEA early, he really had no speed to contend with, leaving EROY for dead at the top of the lane.

Expect a continuation of the Anthony Nunes-Jason DaCosta rivalry, a furlong too long for FATHER PATRICK with the likes of EAGLE ONE coming in at 110lb, hoping to set up the race for stablemate KING ARTHUR, who was used up too early on last when beaten by ONEOFAKIND at nine furlongs and 25 yards.

Running at 121, ONEOFAKIND actually has a 10lb swing on KING ARTHUR out of their last race in which he fell out of the sky with 124lb a furlong out, outfinishing CRIMSON by a half-length.

Having added a crippling last three-furlong move in his repertoire, ONEOFAKIND gets the ideal pace to track. FATHER PATRICK can only try to steal the race from in front. EAGLE ONE will try ensuring a honest pace with KING ARTHUR lurking in the wings to pounce, which could leave a blood trail for Nunes’ closer.

Gary Subratie’s trio – DUKE, CRIMSON and SENTIENT – represents a dangerous three-pronged attack on their best day. However, they face varying challenges at seven furlongs against ONEOFAKIND. DUKE was in receipt of 11lb in the Viceroy Trophy when dismissed at a mile by ONEOFAKIND. CRIMSON has a seven-pound swing and reduced distance against him and five-year-old SENTIENT has been no match for Nunes’ runner in their last two meetings.

All eyes will be on Spencer in the hot seat. He has only won three races this season. However, one was a similar high-pressure call-up aboard TOONA CILIATA in the Eileen Cliggott Memorial.