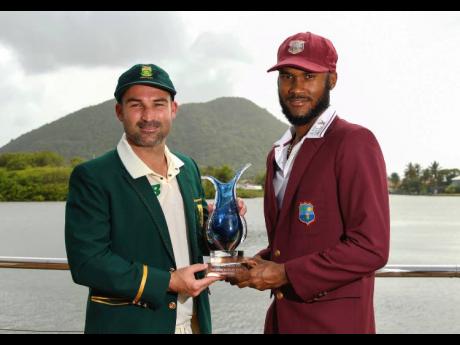 Contributed
West Indies captain Kraigg Brathwaite (right) and his South Africa counterpart Dean Elgar ahead of the start of their second Test match, to be played in St Lucia starting today.

The West Indies will be hoping that they can put on a better showing in front of a rare crowd expected at the Darren Sammy National Stadium today.

The St Lucia government will allow 400 fully vaccinated persons to attend each day of the Test match, as the initiative will see spectators returning to cricket in the Caribbean for the first time since the COVID-19 pandemic.

After a loss within three days in the opening Test, captain Kraigg Brathwaite and his men will try to stop the Proteas from claiming their first series win on the road in four years.

A victory for the home side will square the series, but the visitors will still hold on to the Sir Vivian Richards Trophy.

The Windies have drawn for more firepower to counter what they experienced from the Proteas in the first Test, bringing back pacer Shannon Gabriel to add some steel to the attack, and Darren Bravo to add solidity to the batting.

With the batsmen failing in the opening encounter, Brathwaite says preparations have gone well and is urging the team to be tough and put in a better showing.

“I think the batsmen are in a good space,” he said. “Obviously, South Africa has a good bowling attack, but I know our batters are fully capable of doing well.”

A similar pitch is expected for the second Test and it will be pretty much the same with regards to the South African bowling unit, which was ably led by Kagiso Rabada and includes Anrich Nortje and Lungi Ngidi.

The visitors will once again await a late fitness test for middle-order batsman Temba Bavuma.

South African captain Dean Elgar expects a stiffer challenge from the hosts as he believes pride will force the home side to come out fighting.

“I have been around long enough to know how teams bounce back when you come to their home country and they get a beating,” he said. “I know that they are going to respond because they are an extremely proud cricketing nation.”

The second Test against South Africa bowls off in St Lucia at 9 am Jamaica time.