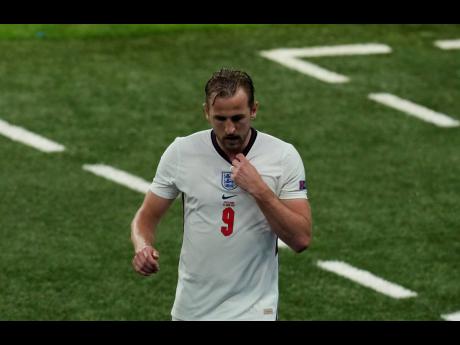 AP
England’s Harry Kane leaves the pitch during the Euro 2020 championship Group D match between England and Scotland at Wembley stadium, in London, yesterday. The game ended in a 0-0 draw.

Not even with the Premier League’s top scorer could England find a way past Scotland.

Maybe Harry Kane was as much the problem as the solution.

On his good days, Kane is one of the game’s ultimate goal threats for both Tottenham and England. But the sluggish striker never came close to scoring in the 0-0 draw between the two teams yesterday at the European Championship.

The England captain barely even touched the ball, and yet coach Gareth Southgate persisted with him for 74 draining minutes at Wembley Stadium in his 60th game this season for his club and his country.

He looked exhausted as England looked devoid of ideas against the dogged and well-marshalled Scots, who lost their Group D opener to the Czech Republic but still have a chance to advance to the round of 16.

At 27, Kane was the oldest outfield player in an England side with an average age of 25 years, 31 days – the youngest ever fielded by the nation at a major tournament.

Both teams had chances to score in the rain at Wembley.

England defender John Stones hit the post with a header in the 11th minute, and Scotland forward Lyndon Dykes had a shot cleared off the line by Reece James in the 63rd.

For England, qualification for the round of 16 isn’t in serious jeopardy with the top two teams from each of the six groups guaranteed of advancing, along with the four best third-place teams.

England have four points, the same as the Czech Republic. The Czechs will be the next visitors to Wembley on Tuesday while Scotland will face Croatia.

The heatwave in London when England opened Euro 2020 by beating Croatia was replaced by a chilly downpour for the 115th meeting with Scotland – and a first 0-0 draw between the neighbours at Wembley.

What also changed from Sunday was the stadium speakers blaring out the Euro 2020 official song, We Are the People, to drown out the smattering of boos that again greeted players taking a knee in their anti-racism gesture before kickoff.