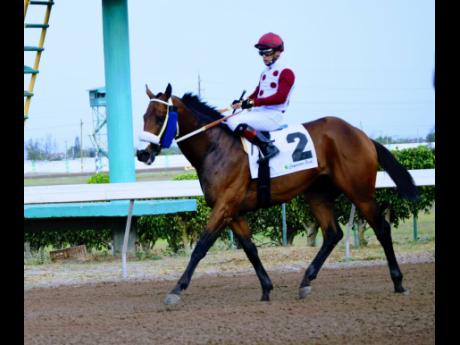 UNITED STATES-bred EAGLE ONE ran past a winded FATHER PATRICK a furlong out in yesterday's Eros Trophy to complete back-to-back upset victories, landing the seven-furlong event at odds of 9-1.

Partnered by Dick Cardenas and running as a lightweight with 111lb, after a 16-1 victory at the distance on May 25, EAGLE ONE tracked FATHER PATRICK, who led easily but was always suspect beyond six furlongs.

Running into a heavy headwind, FATHER PATRICK gave up the ghost after exactly six furlongs and EAGLE ONE ran through to win by a length ahead of closing stablemate, KING ARTHUR, clocking 1:27.0.

ONEOFAKIND, hunting a fifth straight win, was slowly into stride and ridden to recover, along the rail, from post-position two.

However, 121lb was too burdensome for ONEOFAKIND in torrid splits of 23.0, 46.0 and 1:11.2. The stayer failed to settle into a rhythm and was left struggling at the rear of the eight-horse field.

Robert Halledeen was aboard the day's longshot, United STATES-bred ONE DON, who seemingly relished the addition of a visor and was surprisingly early in the pace, landing the five-and-a-half furlong seventh race at odds of 13-1.