Gaye will deliver at trials – Wilson 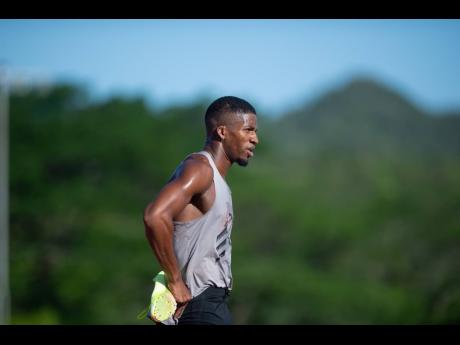 Head coach of Sprintec, Maurice Wilson, said while quarter-miler Demish Gaye is not fully fit going into this week’s National Senior Championships, he is expecting his star athlete to run well enough to make Jamaica’s team to this year’s Olympic Games in Tokyo, Japan.

The National Junior and Senior Championships will be held at the National Stadium from June 24-27.

Wilson told The Sunday Gleaner that Gaye has been nursing a serious foot injury this season, which has kept him out of training for almost two months.

In fact, the 28-year-old has only ran competitively twice this season, last of which was a 45.84 seconds clocking at the JOA/JAAA Olympic Destiny meet last month.

“I would say he is about 70 per cent, if I am going to be honest in terms of his training fitness because he has been out for approximately seven weeks,” said Wilson. “However, we have been able to get in a couple of sessions without him feeling any excessive pain and we are just hoping that he can make the team, then we will take it from there.”

Gaye, who has emerged as one of the country’s top 400m runners over the past few years, currently has a personal best time of 44.55 seconds. The former GC Foster student has also made it to two consecutive World Championships finals in 2017 and 2019, where he finished sixth in London and fourth in Doha.

Wilson pointed out the Gaye has proven himself to be a class athlete since his arrival on the track scene and despite his injury woes this season, he believes that once he goes out and do his best, he should be on the team to Tokyo.

“We are not thinking about the athletes that are coming (into the trials), we are just thinking about running each round and giving it our best shot,” said Wilson. “We all know the quality of Demish, he has been to two consecutive World Championships finals in five years, and that’s not a normal feat for an athlete who has just been running for five years.”

The veteran coach also underscored that Gaye is a big-game performer and will be leaving everything on track when he goes out to compete at the National Championships this week.

“He is not someone that speaks a lot, but I think that his confidence is shown on the track when it’s time for him to compete at high-level competition,” said Wilson. “All I can say is that every single championship that he has attended since 2016, he has run faster than 45 seconds, and so if you follow the graph, then you will know what to expect.”