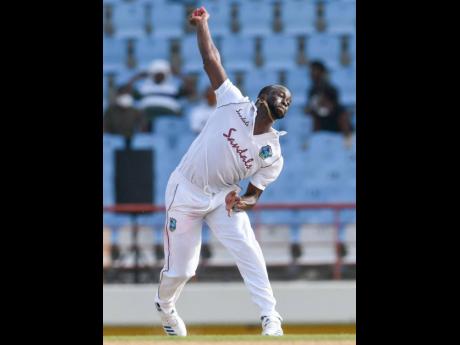 The West Indies will have to chase over 300 runs for victory in their second Test match against South Africa, now on in St Lucia.

It would be the second such achievement this year after what they did in Bangladesh.

The third day of action yesterday was a rain-affected one, and when stumps were drawn due to bad light, the home side were 15 without loss, still needing 309 runs to win. This was after the West Indies bowlers restricted the South Africans to just 174 in their second innings.

Earlier, the West Indies pacers, led by Kemar Roach who bagged four for 52, and Kyle Mayers three for 24, pegged back the Proteas to give themselves a chance of a victory and squaring the series.

The weather also decided it wanted a piece of the action and caused the entire first session to be wiped out.

Roach then got into the act once again as skipper Dean Elgar was the second of three catches in the slip by Jason Holder for 10, with the score on 33 for two.

Eleven runs later, Kyle Mayers showed how dangerous he is as a seaming option as he dismissed Keegan Petersen for 18.

With the quick fall of wickets, the visitors started to play tentatively; however, the home side didn’t let up and continued to probe.

That persistence paid off in the 18th over when Kyle Verreynne edged one to the wicketkeeper off Mayers for six to leave the Proteas at 52 for four.

Quinton de Kock, who had been prolific with the bat, was ineffectual as Holder had him caught behind after facing just two balls.

Fifty-three for five then quickly became 54 for six as Wiaan Mulder also departed without scoring, this time Mayers again with the golden arm doing the business.

After Jayden Seales brought out another brilliant catch from Holder in the slips to remove Keshav Maharaj for six, the Proteas were looking at a second-innings score of 73 for seven.

Kagiso Rabada then came and blasted a quick-fire 40 from 48 balls with five fours and a six to spruce up the innings, but then he fell to Roach to leave the visitors on 143 for eight.

By this time, Rassie van der Dussen had played his way to a half-century while holding up the other end and was left unbeaten on 75 as Roach and Brathwaite wrapped up the innings with the last two wickets.

A Markram c Holder b Roach 4

R van der Dussen not out 75

*K Brathwaite not out 5

K Powell not out 9