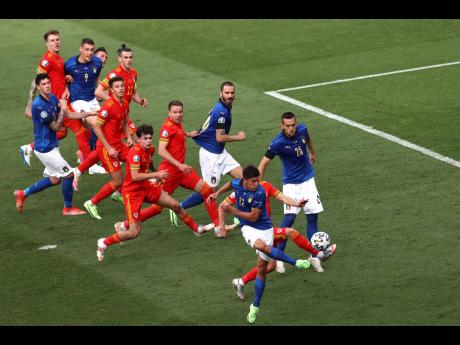 AP
Italy’s Matteo Pessina (foreground) scores the game’s only goal during their final Group A European Championship match against Wales at the Stadio Olimpico in Rome, Italy, yesterday. 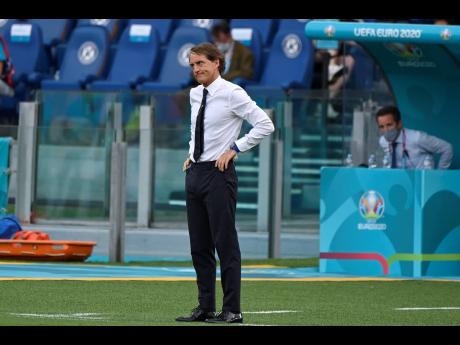 Italy’s reserves really do play as well as their starters. Or just about.

Roberto Mancini has been saying for weeks that all 26 members of his squad are starters. And after beating Wales 1-0 yesterday, despite making eight changes to his starting line-up at the European Championship, it’s hard to argue with him.

“It’s important that the identity of the team remains the same, as changing three or four players shouldn’t make any difference. They all know what to do and the end product doesn’t change,” Mancini said.

“They all proved today that everyone here is a first-choice player,” the coach added. “Winning wasn’t even necessary, which made it difficult in terms of mentality, but we fought for the win anyway and that shows so much.”

Matteo Pessina gave Italy the lead late in the first half by redirecting a free kick from Marco Verratti on a textbook play.

Wales defender Ethan Ampadu was sent off with a questionable straight red card for stepping on Federico Bernardeschi 10 minutes into the second half.

Italy, who won their opening two matches 3-0, finished Group A with a perfect nine points. Wales came second with four points and qualified for the last 16 at only their second European Championship. The Welsh reached the semi-finals at Euro 2016.

“Our focus today was, as long as we qualify we’re happy,” Wales defender Neco Williams said. “In the changing room it feels like we won the game.”

Switzerland ended up third in the group, also with four points, after beating Turkey 3-1 in Baku, Azerbaijan.

The Azzurri first won 30 straight under coaching great Vittorio Pozzo from 1935-39 with a team that won its second consecutive World Cup.

It’s been a remarkable turnaround for this Italy squad, which did not qualify for the 2018 World Cup.