Tokyo Olympics to allow local fans, but with strict limits 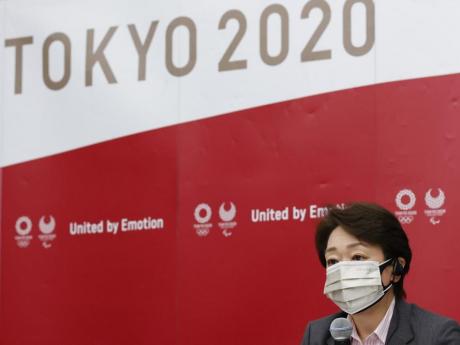 Tokyo 2020 President Seiko Hashimoto speaks during a five-party online meeting at Harumi Island Triton Square Tower Y in Tokyo Monday, June 21, 2021. The Tokyo Olympics will allow some local fans to attend when the games open in just over a month, Tokyo organising committee officials and the IOC said on Monday. (Rodrigo Reyes Marin/Pool Photo via AP)

TOKYO (AP) — A sharply limited number of fans will be allowed to attend the Tokyo Olympics, organisers announced Monday as they tried to save some of the spirit of the Games where even cheering has been banned.

Organisers set a limit of 50% capacity — up to a maximum of 10,000 fans, all of whom must be Japanese residents — for each Olympic venue, regardless of whether it is indoors or outdoors.

Officials said that if coronavirus cases rise again the rules could be changed and fans could still be barred all together.

Spectators from abroad were banned several months ago, and now some local fans who have tickets will be forced to give them up.

The decision comes as opposition among Japanese to holding the Games in July remains high, though may be softening, and as new infections in Tokyo have begun to subside.

Still, health officials fear that in a country where the vast majority of people have yet to be vaccinated, crowds at the Olympics could drive cases up.

The country's top medical adviser, Dr Shigeru Omi, recommended last week that the safest way to hold the Olympics would be without fans.

Allowing fans presents a risk not just at the venues but will also lead to more circulation on commuter trains, in restaurants and other public spaces.

It's already become clear that these Olympics Games will be unlike any others, but organisers have said they are determined to hold them and billions of dollars in broadcast rights and ticket sales are at stake.

Still, much of the fanfare that surrounds them — people from around the world rubbing elbows, a celebratory atmosphere in the host city and the showcasing of the host country's culture — will be off the table or far more muted this year.

Seiko Hashimoto, the president of the Tokyo Olympic organising committee, called the decision “the last piece for the Olympics” to proceed on July 23.

But as with everything about these Olympics — the first postponed in the history of the Modern Games dating from 1896, though previous ones were cancelled during both World Wars — the decision raised many questions.

Hashimoto, meanwhile, left the door open for a no-fans Olympics if the conditions worsen around the pandemic.