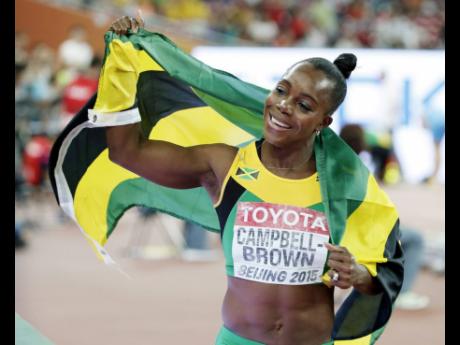 Legendary Jamaican sprinter, Veronica Campbell-Brown, has announced her retirement from competitive athletics, bringing to an end, one of the most successful careers in international track and field.

Campbell-Brown, who last month celebrated her 39th birthday, has won 19 medals at the Olympic Games and World Championships level and 34 as a senior athlete for Jamaica, including back-to-back 200m Olympic gold.

She was also a member of gold medal-winning 4x100m relay teams at the 2004 Athens Olympics and the 2015 Beijing World Championships.

The sprinter made the announcement on her official Instagram account on Wednesday, which was also recognised as International Olympic Day.

It is also one day before the start of Jamaica's Olympic Trials.

"What a journey it has been! Through the grace of God, I have climbed from a small town in Trelawny, Jamaica up the ladder of success to become one of the most decorated women in the Olympic Games and World Championships history," Campbell-Brown stated.

"All glory to the Lord for my successes, He blessed me with the talent, the will to stay focused and the requisite work ethics. Additionally, He placed authentic and supportive people in my life who served as pillars of strength as I maneuvered the highs and lows which littered my athletic career.

"As I climbed, I passed the rung of hurt, that of injuries and rejection not to mention tears, however, they never quenched my aspiration to grasp the fruits of success and satisfaction. For that I must venture to say that I am proud and grateful," the post continued.

"I want to thank the persons and companies who contributed to my successes: my family, especially my husband @omarobrown who in the latter years served as my coach, I must mention friends, fans, supporters, sponsors, coaches and my agent @ontrackmgnt, I could not have done it without your help and support. Thank you from the bottom of my heart.

"As I take off my spikes never to put them on again, this girl from Clarks Town walks away happy and contented with a race well run," it continued.

Campbell-Brown, who became a mother in 2019, says she will continue to focus on her foundation as well as her line of fitness products and motivational speaking engagements.