Fast times for juniors in 100m at Trials 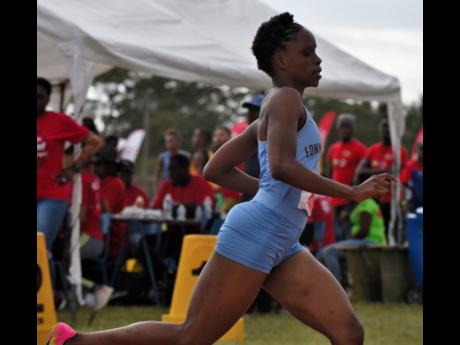 Edwin Allen High School's duo of Serena Cole and Tina Clayton was on fire in the 100m at yesterday's opening day of the Jamaica Athletics Administrative Association National Junior Championships.

Both sped to personal bests of 11.42 and 11.25 seconds respectively to capture the Girls Under-18 and Under-20 events.

Cole set the stage in the first final as she flew out if the blocks to move away from her rivals for a convincing win. It was also personal best for the next three as Alana Reid of Hydel High School clocked 11.62s for second, Alexis James of Petersfield High School was third in 11.67s, and young Lavanya Williams of Rusea's High School third in 11.71s.

In the Girl's Under-20, Tina Clayton was out of the blocks quickly and separated herself from the field as she maintained that momentum throughout, going away to clock a 11.25s. Hydel's Kerrica Hill also produced a personal best 11.43s as Tia Clayton equalled her season's best 11.60s for third.

St Elizabeth Technical High School's (STETHS) athletes continued their great sprinting form this season as in the Boy's Under-18 event, Alicke Cranston won in a personal best 10.41s. Bouwahghi Nkrumie of Kingston College (KC) finished second in a personal best 10.47s and Orlando Wint of STETHS was third in 10.50s.

There was an upset in the Boy's Under-20 where the first three athletes produced personal bests. Sandrey Davison of St Catherine High School took the win in 10.43s, ahead of Andrew Gillips of St Jago High School, who clocked 10.43s. Excelsior High School's Alexavier Monfries placed third in 10.46s.

Earlier in the day, in the first final on the track, Edwin Allen's Rickeisha Simms made up for her ISSA/GraceKennedy Boys and Girls' Athletics Championships disappointment in the Class Three 800m, where she did not finish, by winning the Girl's Under-18 event in 2:12.58 minutes in a close finish over Kishay Rowe of Adolphus Davis High School (2:12.75), with third going to Shone Walters of St Mary High School (2:13.14).

Jamaica College's (JC) Kemmario Bygrave continued his good season form in the two lap event after winning the Boy's Under 18 in 1:52.68 minutes. Adrian Nethersole (1:54.44) of STETHS, and his teammate Rashid Green (2:03.37) took second and third respectively.