Back on top in Tokyo 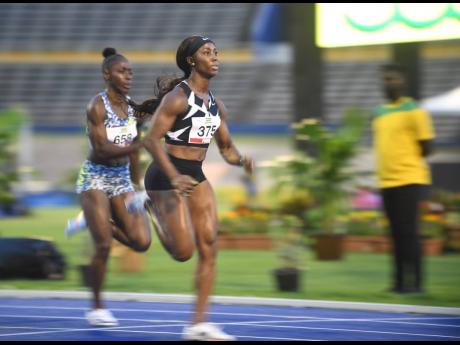 At the Rio 2016 Olympic Games, Shelly-Ann Fraser-Pryce described her 100m bronze as one of her favourite ever medals. It might have seemed like a weird comment considering her bulging medal cabinet, which at that time already boasted several...

At the Rio 2016 Olympic Games, Shelly-Ann Fraser-Pryce described her 100m bronze as one of her favourite ever medals.

It might have seemed like a weird comment considering her bulging medal cabinet, which at that time already boasted several Olympic and World Championships gold medals.

However, with a toe injury hampering her preparation and ability to perform at her best at the last Games, Fraser-Pryce recognised the value of the medal.

However, after continuing to set the pace this season with her 10.71 seconds win in the women’s 100m at the National Senior Championships at the National Stadium on Friday, the iconic sprinter is eager to return to the top of the Olympic podium.

“The aim is to definitely stand on top of the podium,” said Fraser-Pryce. “I mean, 2016 was bitter-sweet and it happened and I think I want to see what I am able to do, healthy and fit and ready to go, and so I am looking forward to that opportunity.”

Fraser-Pryce, 34, the 100m champion at the 2008 Beijing and 2012 London Olympics, has been in mouth-watering form this season and confirmed her stranglehold on women’s sprinting with a starting blocks-to-finish line win in Friday’s finale, which saw Shericka Jackson, 10.82, taking second and defending double Olympic sprint champion, Elaine Thompson Herah, 10.84 running third.

“I am looking forward to it (Olympic Games) because all my life I have had doubters. I have had people who seem to want to determine when you should stop, tell you when you need to go and all of that,” said Fraser-Pryce. “But for me, I am glad that I am always just so driven and focused on what it is that I want to accomplish, and 10.63 was one of those big dreams for me and I got that, and the Olympic gold is also another big dream and that’s what I am going for.”

The four-time World 100m champion is currently being coached by Reynaldo Walcott at the Elite Performance Track Club after parting ways with her long-time coach Stephen Francis at MVP Track Club.

“What can I say about it, it was just a new environment and I think maybe at the end of the day the individualised attention was good,” Fraser-Pryce said.

“I didn’t have a training partner but, for me, I have always maintained and my coach have always said that you are your own competition, nobody controls what you do in your lane but you, and so you have to focus on your execution and what you need to get done, and so I think that’s how training have been for me,” Fraser-Pryce said before warning that there could be more to come.

“Well, when I ran the 10.63 (seconds) the kind of training I was doing I never expected. But this evening to come out here and deliver, and I myself am excited about what’s to happen,” she said.