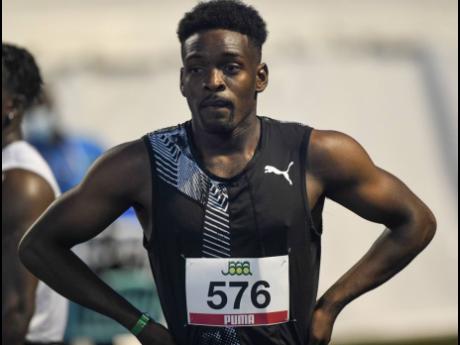 Still overcome with grief after a fatal car accident which claimed the life of his best friend in 2017 and paralysed him for months, Jamaican sprinter Michael Campbell could hardly contain his emotions after competing in the semi-finals of the men’...

Still overcome with grief after a fatal car accident which claimed the life of his best friend in 2017 and paralysed him for months, Jamaican sprinter Michael Campbell could hardly contain his emotions after competing in the semi-finals of the men’s 100m at the National Senior Championships at the National Stadium on Friday.

Campbell’s run is a miracle in itself, considering that he was told by doctors that it was likely he would not walk again, much less run competitively, after the spine injuries he suffered in the accident that took the life of Jordan Scott, who was with him in the ill-fated vehicle.

“I am feeling very happy because I have been through a lot and to come here and do something like this feels very special to me,” Campbell told The Sunday Gleaner.

“When I met in the accident, I was on the bed, the doctor told me that, you will not be able to walk again. I said to him that you can’t tell me that because I will prove you wrong and I am here right now,” added Campbell, who described the last four years as the most difficult period of his life.

“I had to prove a lot of people wrong in the medical field to be here right now, and so I am happy that I could do that and to prove to them that God is the man,” Campbell said.

According to news reports, on September 10, 2017, Campbell and Scott were on their way home when the car they were travelling in veered off the road and crashed into a utility pole on Hope Road in St Andrew.

Police reports state that the car burst into flames shortly after the collision, resulting in Scott being burnt beyond recognition. Campbell, who managed to escape from the vehicle, was taken to the University Hospital of the West Indies where he received treatment.

The incident took place less than a month after Campbell represented Jamaica in the 4x100m at the World Athletics Championships in London, and a few months after his fourth-place finish at the National Senior Championships.

Despite the damage to his spine and the bleak prognosis on his ability to walk and return to the track, Campbell returned to training a year after the accident and has been making steady progress in his development since then.

His first race back was a 10.80 seconds run at the G.C. Foster Classics in March 2019 and he has already improved to 10.24, which he ran in the heats at this year’s Olympic Trials on Thursday.

The 24-year-old, who is a former Jamaica College athlete, underscored that, with his strong Christian faith and the support of his mother, grandmother and other family members, he knew that he would have overcome his injuries.

“The sky is not the limit, there is something beyond that and so (you) just have to reach for what is beyond the stars, because it may be showing blue up there but it is clear,” he said.

“I had people who believed in me, my mother, my grandmother and also my coach (Stephen Francis), and so they motivated me to reach for my goals,” Campbell said.

Despite finishing sixth in his semi-final in 10.42 seconds and failing to make it into the final, Campbell noted that he was very pleased with his efforts.

“For me, I am happy because I came out here to enjoy myself and to just come and compete to the best of my ability, and I did that,” he said.