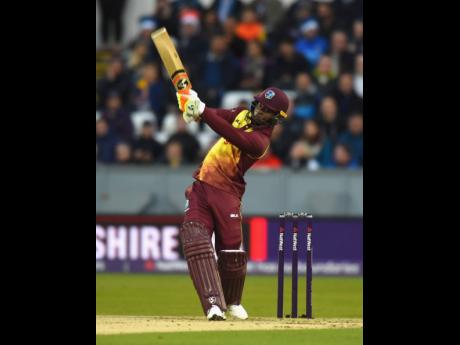 West Indies captain Kieron Pollard says his side wanted to hit the first punch, and they did just that, following a comprehensive eight-wicket win in the opening T20 against South Africa in Grenada yesterday.

Man of the Match Evin Lewis was the star performer with the bat, hitting a 35 ball 71 to set up the massive win, as the West Indies chased down the 160 made by the South Africans, for the loss of just two wickets.

The regional side will be hoping for much of the same and trying to go two up in today’s second encounter, which gets underway at the same venue starting at 1:00 p.m. Jamaica time.

Yesterday’s performance was clinical, to say the least, as Pollard and his men stuck to their guns in restricting the Proteas to 160 for six, thanks to some disciplined bowling in the middle and death overs.

It was a decent start by the visitors after Pollard sent them in to bat, as openers Quinton de Kock and Reeza Hendricks raced to 33 in quick time.

It took the introduction of spinner Fabian Allen in the fourth over to stem the flow, as he bowled Hendricks for 17.

De Kock, who hit two fours and two sixes in his 37, was the second wicket to fall, with the score on 61 for two in the seventh over.

Allen, who bowled with accuracy and guile, would claim a second wicket when he had captain Tamba Bavuma caught in the deep for 22, to leave the South Africans on 95 for three.

The introduction of medium pacers Dwayne Bravo and Obed McCoy then pegged back the Proteas even further, as they struggled to get boundaries towards the latter part of the innings.

Only Rassie Van der Dussen, with 56 from 38 balls, looked intent on scoring, as the visitors limped to 160.

Bravo and Allen finished with two wickets each for 30 and 18 runs, respectively.

In their turn at bat, the West Indian openers made their intentions very clear from the get-go and posted a quick-fire 85 in the first seven overs.

Evin Lewis led that charge with four fours and seven sixes, while Andre Fletcher chipped in with three fours and two sixes in his cameo knock of 30.

After Fletcher fell, Chris Gayle joined Lewis and they continued to play positively, with Gayle hitting one four and three sixes in his unbeaten 32.

When Lewis fell to Tabraiz Shamsi for 71, Andre Russell came in and completed the demolition job with a blistering 23 from 12 balls, with one four and three sixes.

Winning captain Pollard was pleased with his team’s start in the five-match series.

“Being able to restrict them to 160, I thought we were right in the game. Credit must go to the bowlers, and then the way that we went out and chased it with that sort of positive attitude was well done,” said Pollard.