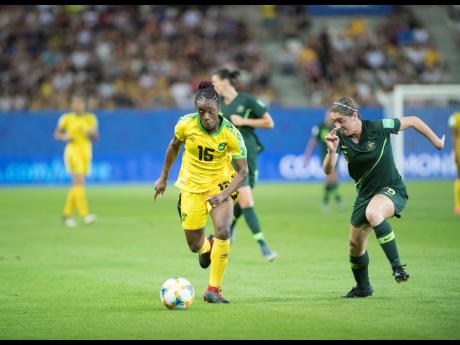 Gladstone Taylor
Tiffany Cameron (left) dribbles towards goal, while being chased by Australia defender Karly Roestbakken during the Jamaica vs Australia fixture of the FIFA Women’s World Cup at Stade des Alpes in Grenoble, France, on Tuesday, June 18, 2019. Australia won 4-1.

Fresh off her first league title win in five years with Hungarian club Ferencvarosi Torna Club (FTC), national midfielder Tiffany Cameron has decided to make yet another move in her much-travelled career.

Cameron, 29, while remaining in the Hungarian league, has signed a two-year deal with ETO FC Gyor. She spent the past year with FTC, having signed for the team last August, with her 11 goals and eight assists in 25 games, helping the team to a Hungarian league and cup double.

Despite having won silverware with FTC, Cameron stated that her decision to change environment for next year was about finding security at the club level, given her long-travelled career with various stopovers.

“It has been such an amazing year with FTC winning a championship league title and the Hungarian Cup. But I’ve been offered something that I’ve been longing for ... stability. Something that isn’t easy to find playing as a professional female footballer,” Cameron said on her official Instagram account.

“I’ve had to make so many club changes throughout my professional career. Some due to injuries, some due to relegation, some due to me not being the right fit for a team’s style of play, some due to financial reasons and some due to wanting to play at a higher level in my career and pursuing a better opportunity,” she added.

It is a professional road that started in 2013, having signed for National Women’s Soccer League (NWSL) team Seattle Reign FC before being released later that June and signing for FC Kansas City. From 2014 she started her journey in Europe and has played for eight clubs in eight years.

Her last stints before FTC were with Stabaek (Norway), Vittsjo GIK (Sweden), USV Jena and Borussia Monchengladbach (Germany). Three out of the four clubs were relegated, which forced her to seek other opportunities.

Cameron says that the deal puts her in the best position possible to succeed domestically and internationally with Jamaica, as they look towards their World Cup qualifying campaign starting in November.

“I’m looking forward to being in a stable environment for the next two years, playing for a team that has added some talented players to their roster this year and who are building for the future. Playing in a competitive and stable environment will help me prepare for another possible World Cup appearance with the Reggae Girlz in 2023, which is my ultimate goal,” Cameron shared.

Cameron played in the recent international friendlies against Nigeria and world champions the United States, respectively, as the Reggae Girlz returned to competitive action after a 15-month hiatus caused by the COVID-19 pandemic.