... but Further And Beyond could spoil Triple Crown party 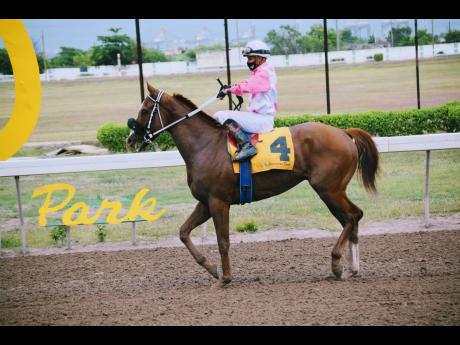 File
MINIATURE MAN, with Dick Cardenas in the saddle.

EVERYTHING in the form book points to MINIATURE MAN winning Saturday’s Jamaica St Leger, unbeaten in three starts since stretched out past six furlongs, including a convincing 2000 Guineas victory over his two main rivals – NUCLEAR NOON and FURTHER AND BEYOND.

However, FURTHER AND BEYOND’s last three races, though losing only the Guineas, appear dubious by his standards. First, his preparation for the Guineas left too many questions hanging. The race itself proved that FURTHER AND BEYOND, though finishing third, was nowhere near his best.

The race was already won a furlong out by MINIATURE MAN when FURTHER AND BEYOND improved two places, going by BILLY WHIZZ and REGAL AND ROYAL. Still, he finished third, three and three-quarter lengths behind MINIATURE MAN, who was never worse than fourth and made his winning move from three furlongs out, covering NUCLEAR NOON with a furlong to run.

Though hardly seen at the track since his Guineas loss, FURTHER AND BEYOND put in a good shift last Saturday morning, his best since turning three, 1:13.2 on the round course, beating NUCLEAR NOON in a six-furlong spin.

Truth be told, though his full sister, ABOVE AND BEYOND, won the Jamaica Oaks at 10 furlongs, sprinter Blue Pepsi Lodge being his sire could be taking toll the farther he is being asked to run. Nevertheless, his below-par run in the 2000 Guineas, and what should have been better performances in the Kingston and Prince Consort Stakes, must be attributed to whatever had affected his preparation for those races.

If FURTHER AND BEYOND turns up anywhere below his best again, MINIATURE MAN will be one race away from closing the Triple Crown. It’s tough to ponder another horse turning the tables on him.

Speedy, SHE’S A WONDER will be dragging many off their bridles. Punters in the market for a longshot, should the favourites go kamikaze, can hitch the likes of PRINCE MARSHALL and BERN NOTICE on their bets.

RABBIT IN THE HAT

PRINCE MARSHAL, though finishing second, by a distance, behind BIG JULE on June 21, his finishing time, 2:01.3, would have similarly beaten DADDY JONES and company in Division One. He returns with visor, figure eight and lasix, which were added last time out. He has worked well since and could be the rabbit in the hat. His grand sire, Legal Process, throws decent winner-producing mares such as Triple Crown winner, ALSAFRA, dam of two-time Diamond Mile winner, SEEKING MY DREAM.

BERN NOTICE, a quirky colt who only needs a clean break to spring the upset of the year, won a route race by nearly eight lengths in January, returning up in class at a mile to go down by a half-length to importee ONE DON.