At City to win

Shaw shares targets ahead of season with new club 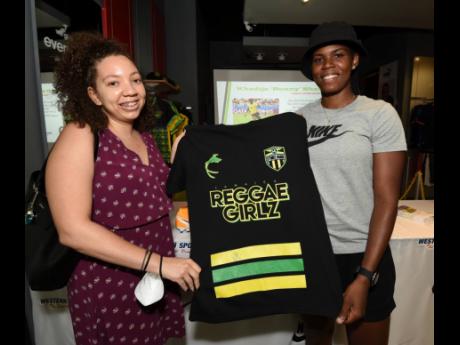 Freshly minted Manchester City striker, Khadija ‘Bunny’ Shaw, says she is looking forward to starting her experience with the English Women’s Super League team, and has underlined her desire to help the team to trophies this season.

Shaw, who recently signed a three-year contract with City, told The Sunday Gleaner that one of her main goals this season is to help her new club to win next season’s UEFA Champions League competition.

“I tend not to talk about my personal goals, but I just want to go to Manchester City and help the team win trophies and so that is one of the general goals,” said Shaw. “I want to compete and hopefully at the end, we could be Champions League champions.”

Shaw is coming off an excellent season with Bordeaux in the Feminine Division One in France, where she ended the season as the competition’s leading goalscorer with 22 goals.

She pointed out that she had received a lot of offers from other top European clubs, but she eventually chose to commit to ‘the Citizens’ as she saw the club as the perfect fit for her continued development and her style of play.

“There were quite a few offers and so you know obviously being the top scorer of the league that comes with that, but I always wanted to play in England and for Manchester City, with their style of play, because that is how I play,” she said.

“Playing for Manchester City was a choice that I made and I am just looking forward to it,” Shaw stated.

The 24-year-old former St Jago High School star pointed out that despite her exploits in the French league last season, there is still a lot room for improvement in her game.

“I am one to always put pressure on myself because I have done good things, but I think there is a lot more that can be done to my game,” Shaw said. “I have spoken to the coach from Manchester City and he will design a programme for me so when I get there, I can work on my weaknesses and also strengthen my strengths.”

Manchester City finished second in the Women’s Super League last season and were knocked out by Barcelona in the quarter-finals of the Champions League.

Meanwhile, a number of football fans turned out at the Western Sports store in Tropical Plaza in Half-Way Tree to attend an autograph session with Shaw.

She noted that she was grateful for the love that she received from the fans.

“It is was a good feeling to see so many fans coming out to show their support and appreciation and so it’s just a motivation to go out there and I want to not just represent myself, but also Jamaica,” Shaw stated.

Western Sports also donated 10 pairs of Nike football boots to Shaw, who will hand them over to a community sports project of her choice.