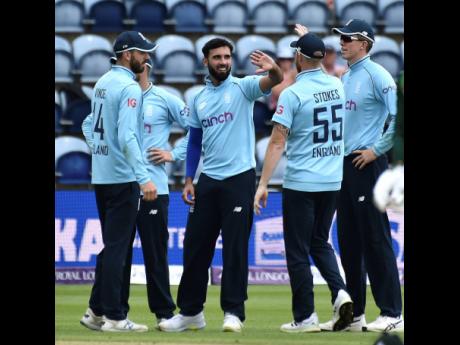 Less than 24 hours after training together for the first time, an emergency England side made light of chaotic circumstances to thrash Pakistan in the first One-Day international (ODI) by nine wickets yesterday.

With 16 first-choice players in isolation after a COVID-19 outbreak, and a handful of others out injured, a shadow squad was scrambled to contest the three-match series and responded with a magnificent effort.

Seamer Saqib Mahmood seized the unexpected opportunity 10 months since his last international appearance, taking two wickets in the first over of the day and finishing with career-best figures of 4-42 as Pakistan crumbled to 141 all out in 36 overs.

A slender chase was devoured with unerring ease, Test regular Zak Crawley posting 58 not out in his first white-ball innings for England, and Dawid Malan effortlessly compiling an unbeaten 68 as they needed less than 22 overs of the allocated 50.

Five debuts were handed out before the toss, with Crawley, Phil Salt, John Simpson, Lewis Gregory, and Brydon Carse inducted as England fielded a side boasting just 128 ODI caps. Of those, 98 belonged to stand-in captain Ben Stokes, rushing his recovery from an injured finger to fill the leadership void.

Another six caps came from Mahmood, previously a dressing room rookie but now the side’s third most experienced performer.

England would have settled for a solid first over from him, but he produced a spectacular one. His first ball was quick, tight to the stumps, and cramped Imam-ul-Haq just enough to trap the opener lbw on the umpire decision review system.

That meant an early entrance for Babar Azam, the world’s No. 1 ODI batsman, but he was soon making an early exit, too. His second ball from Mahmood had a hint of swing and just enough threat to demand attention, clip the edge, and carry through to Crawley at slip. At 0-2, Pakistan had been rattled instantaneously.

Gregory had a tough act to follow at the other end, but he quickly settled into a rhythm and hit the jackpot with his eighth ball, nicked in the channel by Mohammad Rizwan and sailing into the gloves of Simpson.

There were drops, Malan diving in the deep, Simpson standing up to the spin, and Matt Parkinson underneath a dolly, but the innings was still wrapped up with 14 overs to spare. Mahmood added Faheem Ashraf to his career-best haul, and Craig Overton took care of the last two to open his own ODI account.

The chase was a gentle one, but Salt, England’s first Wales-born player since Simon Jones in 2005, missed out.

He had seven when he aimed a big swing at the stirring left-arm pace of Shaheen Shah Afridi and edged to second slip.

There was no pressure to score quickly, but when Malan peeled off four boundaries in the space of nine deliveries, it nudged England’s powerplay score up to a lively 61-1.

The boundaries continued to flow, Crawley taking a liking to Haris Rauf.

England reached 100 in the 16th over, 10 overs quicker than Pakistan for five fewer wickets, and Malan brought up his own half-century with a slice of luck, inside-edging a reverse sweep for four. Both batsmen moved smoothly past 50, Malan at exactly a run-a-ball and Crawley even quicker. Crawley helped himself to the winning run.