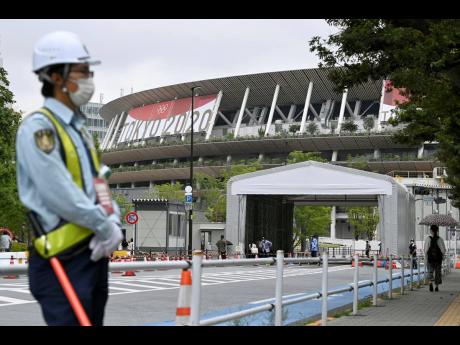 AP
A security guard outside the National Stadium in Tokyo yesterday. Japan is set to place Tokyo under a state of emergency starting next week and lasting through the Olympic Games, with COVID-19 cases surging and feared to multiply during the event.

Tokyo’s governor has banned fans from stadia and arenas in the city when the Olympics begin in two weeks.

This means the Olympics will be a largely TV-only event, after the Japanese government put the capital under a COVID-19 state of emergency because of rising new infections and the highly contagious Delta variant.

It was a serious blow for Japanese taxpayers and local organisers of the Games, which was already postponed from 2020 because of COVID-19. Hundreds of millions of dollars in ticket revenue will be lost, and that must be made up by the government. Fans also have endured months of uncertainty about whether the Olympics will go ahead.

Fans from abroad were banned months ago, and the new measures will mean no spectators at both indoor and outdoor venues.

The ban covers Tokyo and three surrounding prefectures – Kanagawa, Saitama, and Chiba. A smattering of events in outlying areas, like baseball in the northeastern prefecture of Fukushima, will allow a limited number of fans.

The state of emergency begins July 12 and runs through August 22. The Olympics, which open July 23 and run through August 8, fall entirely under the emergency period, while the Paralympics open on August 24.

“Taking into consideration the impact of the Delta strain, and in order to prevent the resurgence of infections from spreading across the country, we need to step up virus prevention measures,” Suga said.

In principle, the July 23 opening ceremony at the new US$1.4 billion National Stadium (almost J$212 billion) will be without paying fans, although some dignitaries, sponsors, IOC officials, and others will be allowed to attend.

“We will have to review the situation about the dignitaries and stakeholders,” organising committee President Seiko Hashimoto said of the opening ceremony.

“No fans was a very difficult decision,” she added.

Hashimoto acknowledged some regrets, particularly about the decision coming so late.

“We had no choice but to arrive at the no-spectator decision,” she said. “We postponed and postponed, one after another. I have done some soul-searching about that.”

The emergency declaration made for a rude arrival for IOC President Thomas Bach, who landed in Tokyo yesterday for the Games. He attended the virtual meeting on fans from his five-star hotel for IOC officials where he was self-isolating for three days.