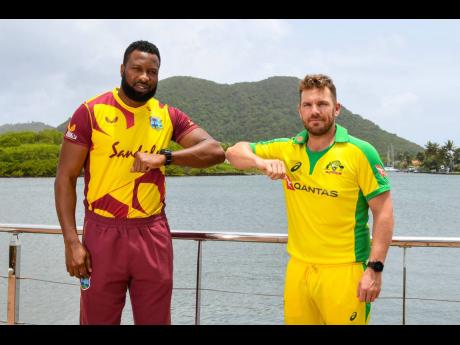 The memories of the series loss against South Africa still linger for West Indies captain Kieron Pollard, who is hoping that his troops can flip the script and find a winning formula against Australia in the first of five T20 International cricket matches, starting today in St Lucia at 6:30 p.m. Jamaica time.

Not surprisingly, the post-match press conference was centred on the Caribbean team’s poor showing with the bat in the last series, and Pollard made it clear that they have been putting in some work behind the scenes – both mentally and physically – to remedy that situation against a weakened, yet professional Aussie aggregation.

“Remember, at the end of the day, we continue to work with individuals, and some things may take longer than some. Some instances may not happen instantaneously, but everything that we do is work in progress, and we need to find that way,” said Pollard.

Finding that way cannot come any sooner for Pollard and the brittle middle-order unit, which failed repeatedly to negate the South African spinners in the last series.

Apart from Evin Lewis, who scored the second-most runs – 178 – in the South Africa series, West Indies’ circumspect middle order will be of main concern, with all eyes on Nicholas Pooran, captain Pollard, and Andre Russell as the trio scored a combined 199 runs in the five matches against South Africa.

If the batting can finally work out their kinks, Pollard believes that the series will be closely contested despite the likes of top guns Steve Smith, David Warner, Glenn Maxwell, and Pat Cummins not being available for the Aussies.

Pollard says his team will be taking a no-nonsense approach, starting with today’s first game, as the Windies hope to get back to winning ways with the bigger picture of the World Cup down the line.

“Each game is a crunch match for us, and one thing I don’t like is to take any team for granted or lightly. Everyone is important, and we want to get some wins under our belt,” said Pollard.

The Australians, on the other hand, will be banking on the form of batsmen Josh Phillipe, Matthew Wade, and Moises Henriques, who all hit half-centuries in the team’s intra-squad warm-up games days ago.

Meanwhile, their bowling will be spearheaded by pacer Mitchell Starc, who picked up three wickets in the practice match. However, spin is also expected to factor, according to Ashton Agar, who is likely to feature along with Adam Zampa.

“Spin seems to play a big role in the power plays in the West Indies,” Agar said, “[but] you have to be realistic. Some days it’s going to work really well. Other days they (batsmen) are going to get on top of you because you’ve got two fielders out and not a lot of pace on the ball as a spinner.”