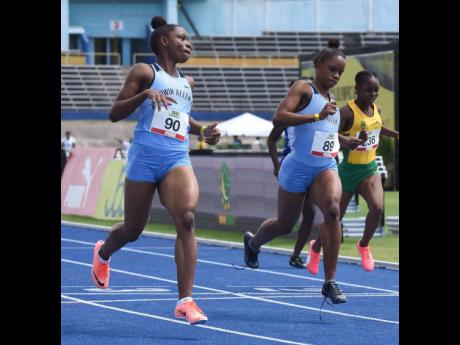 Jamaica's Tina Clayton was on fire on Friday's opening day of the three-day North American, Central American and Caribbean Athletic Association (NACAC) Under-18 and Under-23 Championship in San Jose, Costa Rica, as she blazed to a personal best 11.17 seconds to win the Girl's Under-18 10m.

The time done by Clayton was the fastest on the World Athletics Under-18 Top list, while it was the third-fastest among Under-20 athletes. Only her Jamaican compatriots, Briana Williams, 10.97s, and Ackera Nugent, 11.09s, have gone faster.

On a day when Jamaican athletes were very dominant, Clayton, the 17-year-old Edwin Allen High School student athlete, who had previously recorded a best of 11.25s seconds to win the Under-20 100m at the National Championships in late June, was in a no-nonsense mood as she flew out of the blocks and sped away from her rivals to earn an impressive win. Her Jamaica and Edwin Allen teammate, Serena Cole, who won the Under-18 100m at the National Championships, was a distant second in 11.52s, with third going to Mariandre Chacón Aroche of Guatemala in 11.81s. Jamaica's Ashanti Moore was disqualified from this event for false start.

Clayton's time was much faster than that recorded by the winner of the Under-23 100 metres, Halle Hazzard of Grenada, who clocked 11.42s.

Alicke Cranston also maintained his impressive form this season. Following his sprint double success at the National Championships, the St Elizabeth Technical High student captured the Boys' Under-18 100m after stopping the clock at 10.42s, getting the better of Antigua and Barbuda's Ajani Daley, 10.68s, and Grenada's Kyle Lawrence, 10.75s, respectively.

Jamaica missed out on a 100m sweep as Odaine McPherson had to settle for second in 10.39s in the men's Under-23 race. Kerron Griffiths of Barbados picked up the win in 10.33s.

Aliyah Baker and Roshawn Clarke gave Jamaica double success in the Under-18 400 metres hurdles. Baker, 1:03.36 minutes, was first among the girls, finishing ahead of The Bahamas' Kasha Neilly, 1:05.26. Clarke, of Camperdown High, continued his red-hot form by winning the boys' equivalent in an impressive 51.95s. Shimar Bain of The Bahamas was second in 53.39s, while third went to Jamaica's Shamer Blake in 55.20s.

Cedricka Williams, the Holmwood Technical girl who broke the Class Two discus record at Champs this year, extended that good form in the Under-18 event in style with a winning throw of 45.37m. Britannia Johnson made it a Jamaica quinella, the Camperdown High student finishing second with 43.59m.

In the Under-23 shot put, Danielle Sloley had a second-place finish for Jamaica, after heaving the metal ball 13.85m.